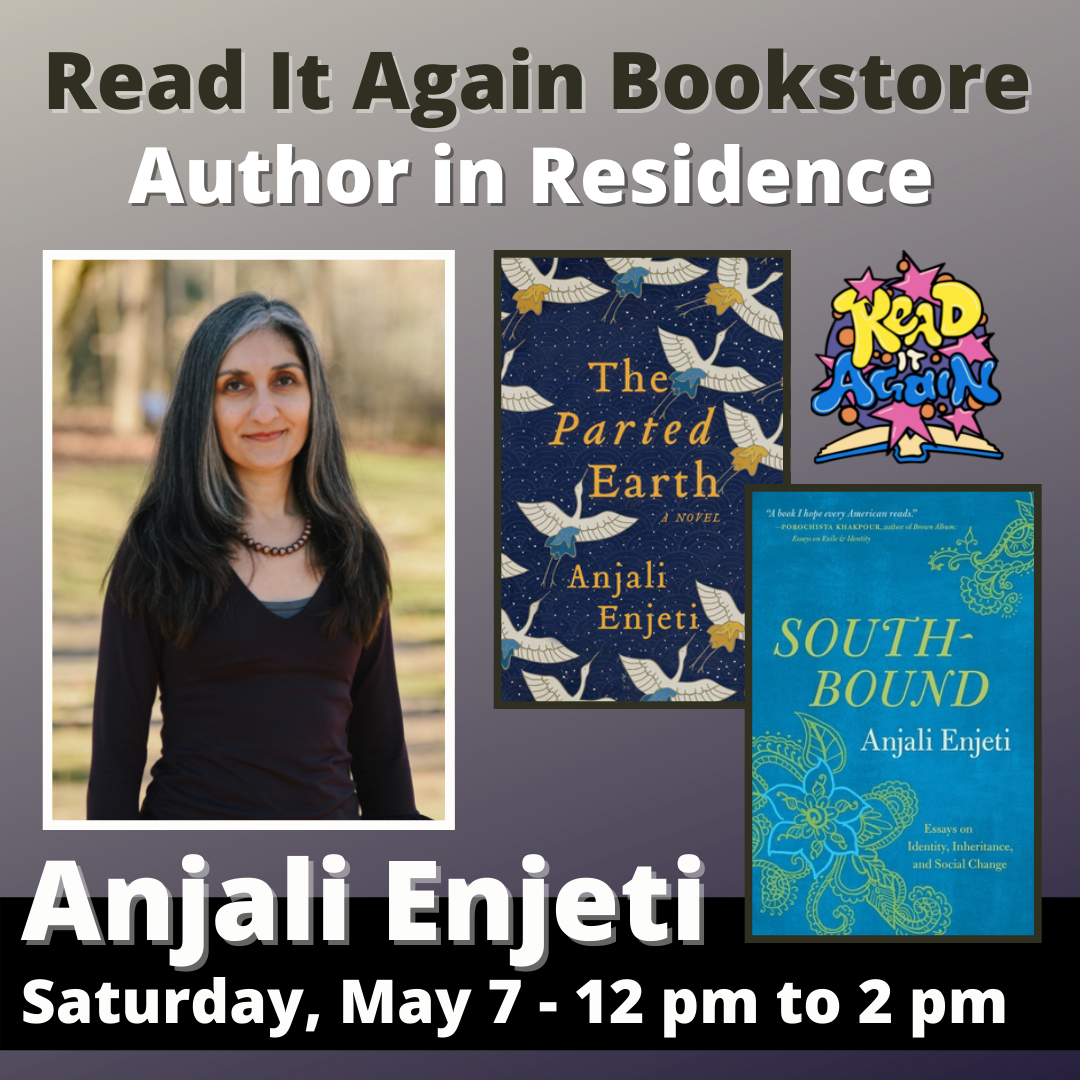 We are so excited to welcome Anjali Enjeti to Read It Again Bookstore. Anjali will be signing books from May 7th, from 12 to 2 pm. Anjali is a fabulous writer and a good friend of RIA, you have to come by, say hi, and buy one of her books.

Anjali Enjeti is a former attorney, organizer, and journalist based in Johns Creek. She is the author of the critically-acclaimed books Southbound: Essays on Identity, Inheritance, and Social Change, and The Parted Earth. Her other writing has appeared in Oxford American, Boston Globe, Harper’s Bazaar, Atlanta Journal-Constitution, Washington Post, and elsewhere. A former board member of the National Books Critic Circle, she teaches creative writing in the MFA program at Reinhardt University.

A move at age ten from a Detroit suburb to Chattanooga in 1984 thrusts Anjali Enjeti into what feels like a new world replete with Confederate flags, Bible verses, and whiteness. It is here that she learns how to get her bearings as a mixed-race brown girl in the Deep South and begins to understand how identity can inspire, inform, and shape a commitment to activism. Her own evolution is a bumpy one, and along the way Enjeti, racially targeted as a child, must wrestle with her own complicity in white supremacy and bigotry as an adult.

The twenty essays of her debut collection, Southbound, tackle white feminism at a national feminist organization, the early years of the AIDS epidemic in the South, voter suppression, gun violence and the gun sense movement, the whitewashing of southern literature, the 1982 racialized killing of Vincent Chin, social media’s role in political accountability, evangelical Christianity’s marriage to extremism, and the rise of nationalism worldwide.

In our current era of great political strife, this timely collection by Enjeti, a journalist and organizer, paves the way for a path forward, one where identity drives coalition-building and social change.

In August 1947, 16-year-old Deepa’s life in New Delhi begins to unravel in the days leading up to the birth of the Muslim minority nation of Pakistan, and the Hindu majority nation of India. Her secret Muslim boyfriend Amir, who sends her origami love notes, must now flee with his sister Layla and their parents to Lahore, Pakistan. Amir promises to return to Delhi to marry Deepa after the violence of Partition has ended. Soon after Amir’s departure, Deepa’s parents are killed. Her God-parents, fearful that Deepa is in grave danger, force her to move with them to London. Nine months later, Deepa gives birth to Vijay. She never sees or hears from Amir again.

After a devastating miscarriage in Atlanta in the present day, 40-year-old newly unemployed Shanthi (“Shan”) Johnson must confront her husband Max about his reckless spending. While grieving both her pregnancy loss and her marriage’s subsequent implosion, she finds clues that lead her to believe that the real reason her deceased father Vijay had abandoned her and her mother 30 years earlier to move to New Delhi was because he was in search of his father, a man he’d never known. To kickstart her life again, Shan moves out of her marital home, searches for a new job, and resumes her father’s search for her grandfather, whose name, she later learns, is Amir. To find Amir, Shan must first track down her estranged 86-year-old grandmother Deepa, a prickly woman who never wanted to have anything to do with Shan. During Shan's search, which eventually takes her to Amsterdam and New Delhi, she comes to realize that the origami love notes Amir once sent to Deepa may be the clue to their reunion.