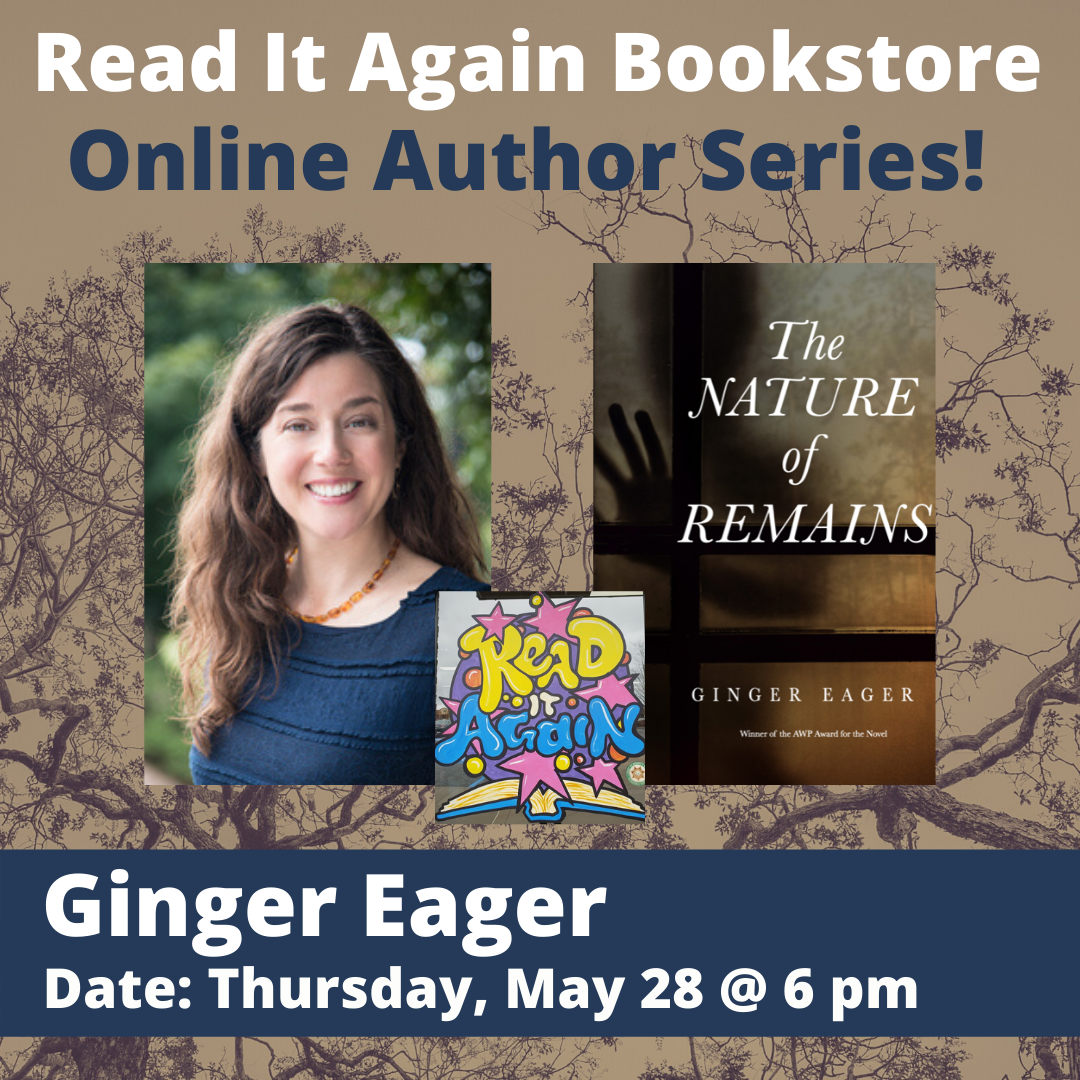 Read It Again Bookstore is excited to welcome Ginger Eager May 28 at 6 pm EST. Come and meet this local author who everyone is excited about! Check out the reviews on her book, Nature of Remains! Ginger is donating a portion of the sales of her book to Circle of Love, a shelter for victims of domestic abuse in Greensboro, Georgia.

You can watch the event here-

The Nature of Remains

In the tiny town of Flyshoals, Georgia, karma is writ small enough to witness. When Doreen Swilley discovers that her boss, who is also her lover, intends to fire her in order to placate his dying wife, she devises a plan to steal his business from him. Her plan just might work too, if she is not thwarted by a small town’s enmeshed histories and her own dark secrets.

Set during the 2009 recession, The Nature of Remains rests at the intersection of class, gender, education and place. Eager’s deeply drawn characters endow this novel with profound authenticity. Through extended geological metaphor, we witness the orogeny, crystallization, and weathering of the human soul. The forces impacting Doreen reflect how even a woman’s most precious connections—her children, her grandchildren, her lover—operate within larger social structures that challenge her sovereignty.

Winner of the 2018 AWP Award for the Novel

“With the wrenching simplicity of Kent Haruf and the dark southern lyricism of Daniel Woodrell, the author of The Nature of Remains has generated a story that’s tragic and restrained, piercing, compassionate, and incredibly wise in the ways of human nature. Like the amethysts that make up the book’s thematic core, the characters are shaped by powerful forces from within and without. They fracture and yield. They cleave blindly to the very patterns that will destroy them.”

-- Paula McLain, author of The Paris Wife and Circling the Sun

“Eager’s evocative debut sings with the true cadence of the South. Her writing is sure and graceful, her characters both fully formed and flawed. Doreen Swilley is a feminist everyman, and her struggles to find justice and softness in the hardscrabble world Eager renders so truthfully broke my heart in all the best ways. The Nature of Remains is a story that will linger in your mind and heart, told beautifully by a writer of rare talent. Don’t miss it.”

-- Joshilyn Jackson, author of The Almost Sisters and Never Have I Ever

Ginger Eager grew up in Snellville, Georgia in a hardworking family that valued kith and kin.  Ginger’s reviews, essays, and short stories have appeared in The Chattahoochee Review, Bellevue Literary Review, The Georgia Review, West Branch and elsewhere. She lives in Decatur, Georgia, with her husband and their college- aged son.  A portion of the proceeds of The Nature of Remains will be donated to Circle of Love, a shelter for victims of domestic abuse in Greensboro, Georgia.

The Nature of Remains (Paperback)