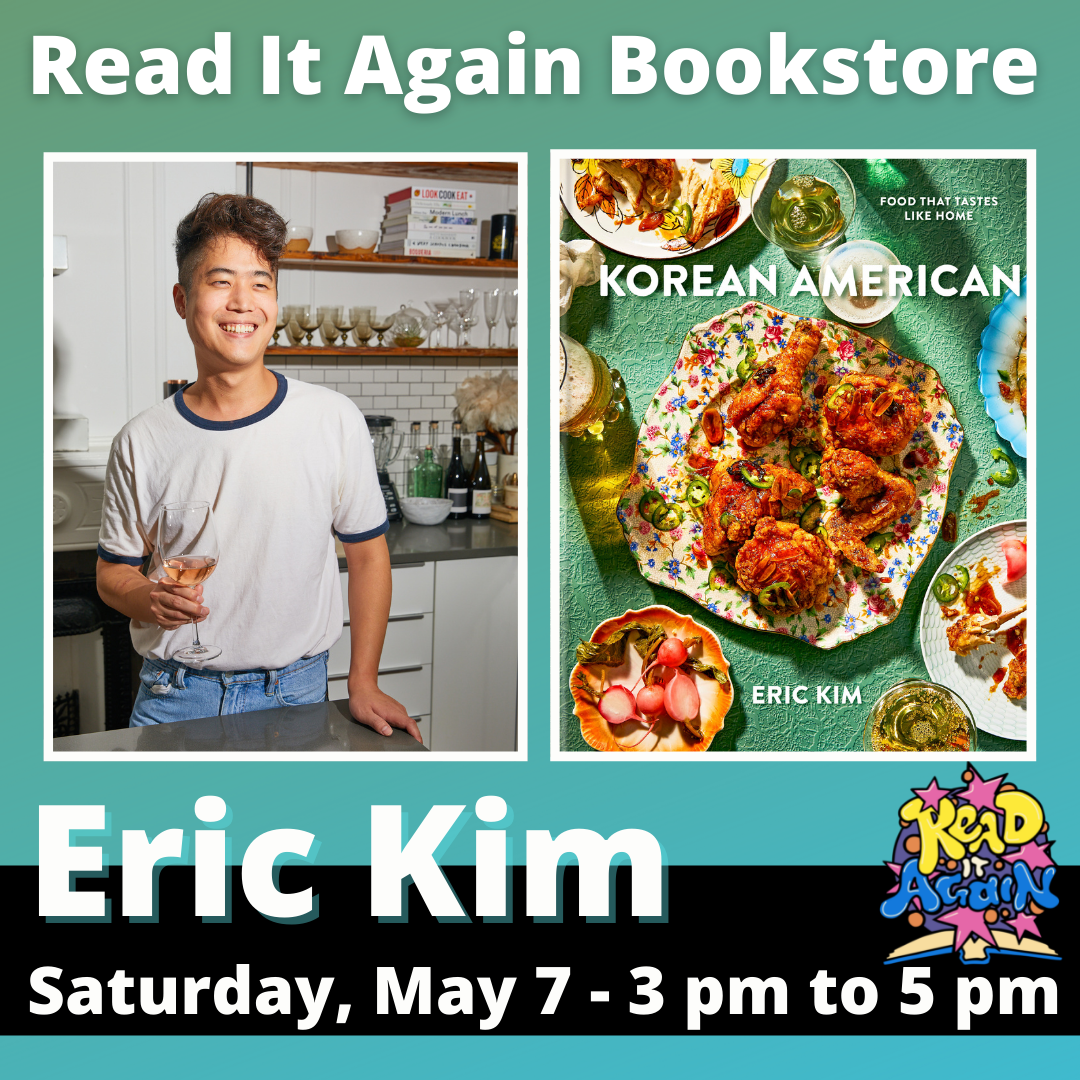 We are so excited to welcome Eric Kim to Read It Again Bookstore. This North View High School alum is making a special stop at RIA during his book tour! Join us on May 7th from 3 to 5 pm.

ERIC KIM is a New York Times staff writer born and raised in Atlanta, Georgia, and the author of Korean American: Food That Tastes Like Home (Clarkson Potter, 2022). He worked his way through the literary and culinary world to eventually become a digital manager at Food Network and a senior editor at Food52, where he amassed a devoted readership for his "Table for One" column. He now hosts regular videos on NYT Cooking's YouTube channel and writes a monthly column for The New York Times Magazine. A former contributing editor at Saveur, Eric taught writing and literature at Columbia University, and his work has been featured in The Washington Post, Bon Appétit, and Food & Wine. He lives with his rescue pup, Quentin Compson, in New York City.

An homage to what it means to be Korean American with delectable recipes that explore how new culinary traditions can be forged to honor both your past and your present.

New York Times staff writer Eric Kim grew up in Atlanta, the son of two Korean immigrants. Food has always been central to his story, from Friday-night Korean barbecue with his family to hybridized Korean-ish meals for one — like Gochujang-Buttered Radish Toast and Caramelized-Kimchi Baked Potatoes — that he makes in his tiny New York City apartment. In his debut cookbook, Eric shares these recipes alongside insightful, touching stories and stunning images shot by photographer Jenny Huang.

Playful, poignant, and vulnerable, Korean American also includes essays on subjects ranging from the life-changing act of leaving home and returning as an adult, to what Thanksgiving means to a first-generation family, complete with a full holiday menu — all the while teaching readers about the Korean pantry, the history of Korean cooking in America, and the importance of white rice in Korean cuisine. Recipes like Gochugaru Shrimp and Grits and Smashed Potatoes with Roasted-Seaweed Sour Cream demonstrate Eric's prowess at introducing Korean pantry essentials to comforting American classics, while dishes such as Cheeseburger Kimbap and Crispy Lemon-Pepper Bulgogi do the opposite by tinging traditional Korean favorites with beloved American flavor profiles. Baked goods like Milk Bread with Maple Syrup and Gochujang Chocolate Lava Cakes close out the narrative on a sweet note.

In this book of recipes and thoughtful insights, especially about his mother, Jean, Eric divulges not only what it means to be Korean American but how, through food and cooking, he found acceptance, strength, and the confidence to own his story.