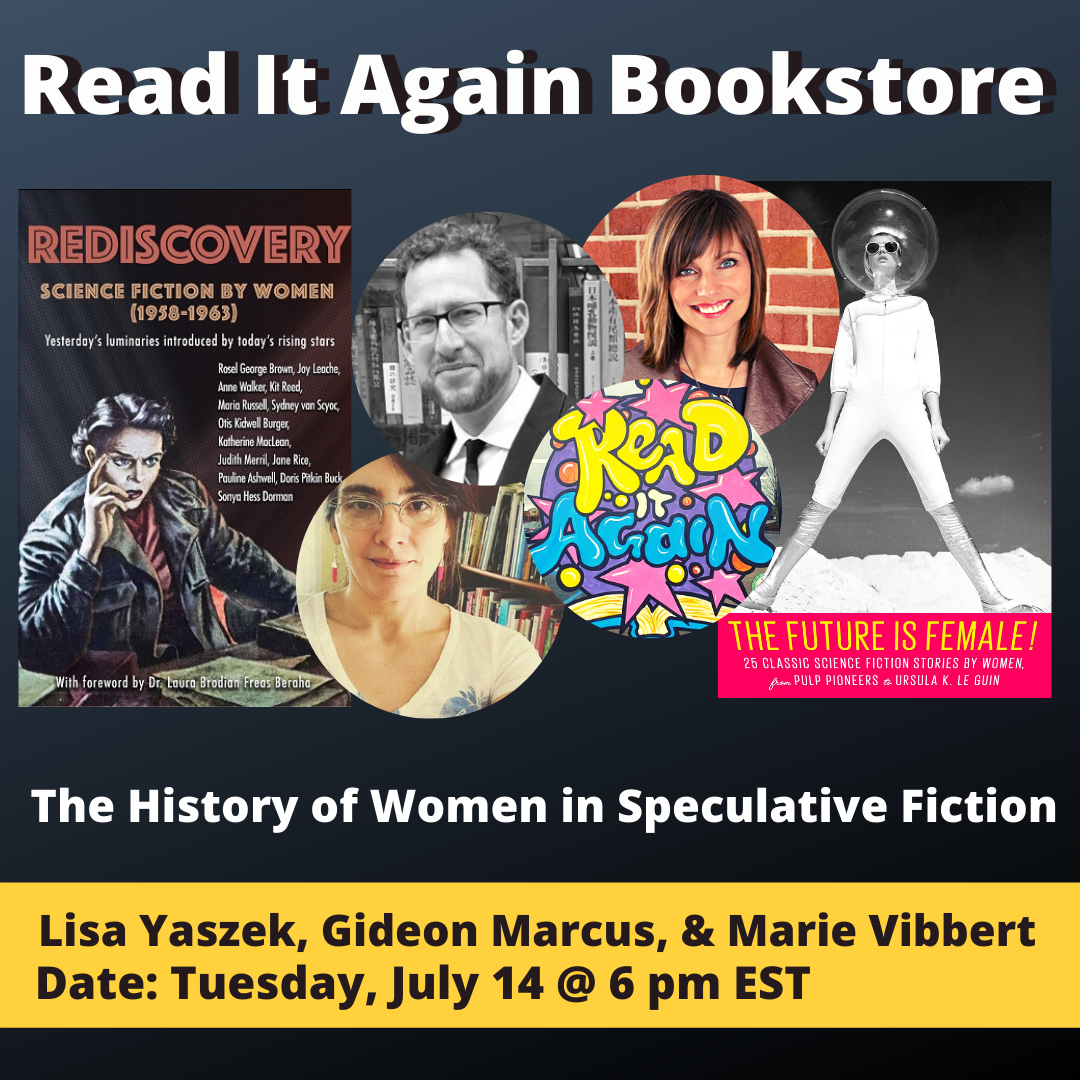 Read It Again Bookstore is out of this world excited to welcome Lisa Yaszek, Gideon Marcus and Marie Vibbert for a panel on early history of women in speculative fiction. The last time we talked with Lisa and Gideon, we had so much fun. This is a dream team panel. We will be talking about the lives of the women who pioneered speculative fiction, comparing the stories they wrote and the time in which they were written. You don't even have to be a fan of speculative fiction, if you are a fan of history or women's history, this panel is for you. Please join us July 14th at 6pm EST.

You can watch this event here- https://www.youtube.com/watch?v=oamWx0DY_A4

Lisa Yaszek is Professor of Science Fiction Studies in the School of Literature, Media, and Communication at Georgia Tech, where she researches and teaches science fiction as a global language crossing centuries, continents, and cultures. She is particularly interested in issues of gender, race, and science and technology in science fiction across media as well as the recovery of lost voices in science fiction history and the discovery of new voices from around the globe. Yaszek’s books include The Self-Wired: Technology and Subjectivity in Contemporary American Narrative (Routledge 2002/2014); Galactic Suburbia: Recovering Women’s Science Fiction (Ohio State, 2008); and Sisters of Tomorrow: The First Women of Science Fiction (Wesleyan 2016). Her ideas about science fiction as the premiere story form of modernity have been featured in The Washington Post, Food and Wine Magazine, and USA Today and on the AMC miniseries, James Cameron's Story of Science Fiction. A past president of the Science Fiction Research Association, Yaszek currently serves as an editor for the Library of America and as a juror for the John W. Campbell and Eugie Foster Science Fiction Awards.

Gideon Marcus is a professional space historian, author, and public speaker with a passion for teaching. He literally wrote the book on the early automated American space program in a series of articles for Quest: Space Quarterly.
Gideon is the founder of the Serling-Award winning and Hugo-nominated web project, galacticjourney.org, the mission of which is to recover the lost voices of SFF and the Space Race, making the past relevant to today. To that end, he has assembled a diverse team of twenty individuals, covering Science Fact and Fiction across the globe as it existed exactly 55 years ago. His educational series of lectures/panels, performed at conventions and public venues across the West Coast, are must-see events, both entertaining and enlightening.

Marie Vibbert is a digital library developer at Case Western Reserve University, and has conducted a statistical survey of the appearance of female-seeming names in fiction writing credits in major speculative fiction magazines from 1930 to 2010.  An article based on her research will appear soon in Analog.
Besides selling fifty-odd short stories, twenty-some poems and a few comics, Marie Vibbert has been a medieval (SCA) squire, ridden 17% of the roller coasters in the United States and has played O-line and D-line for the Cleveland Fusion women’s tackle football team.
She has been translated into French, Chinese, and Vietnamese!  Her work has been called “..the embodiment of what science fiction should be…” by The Oxford Culture Review.