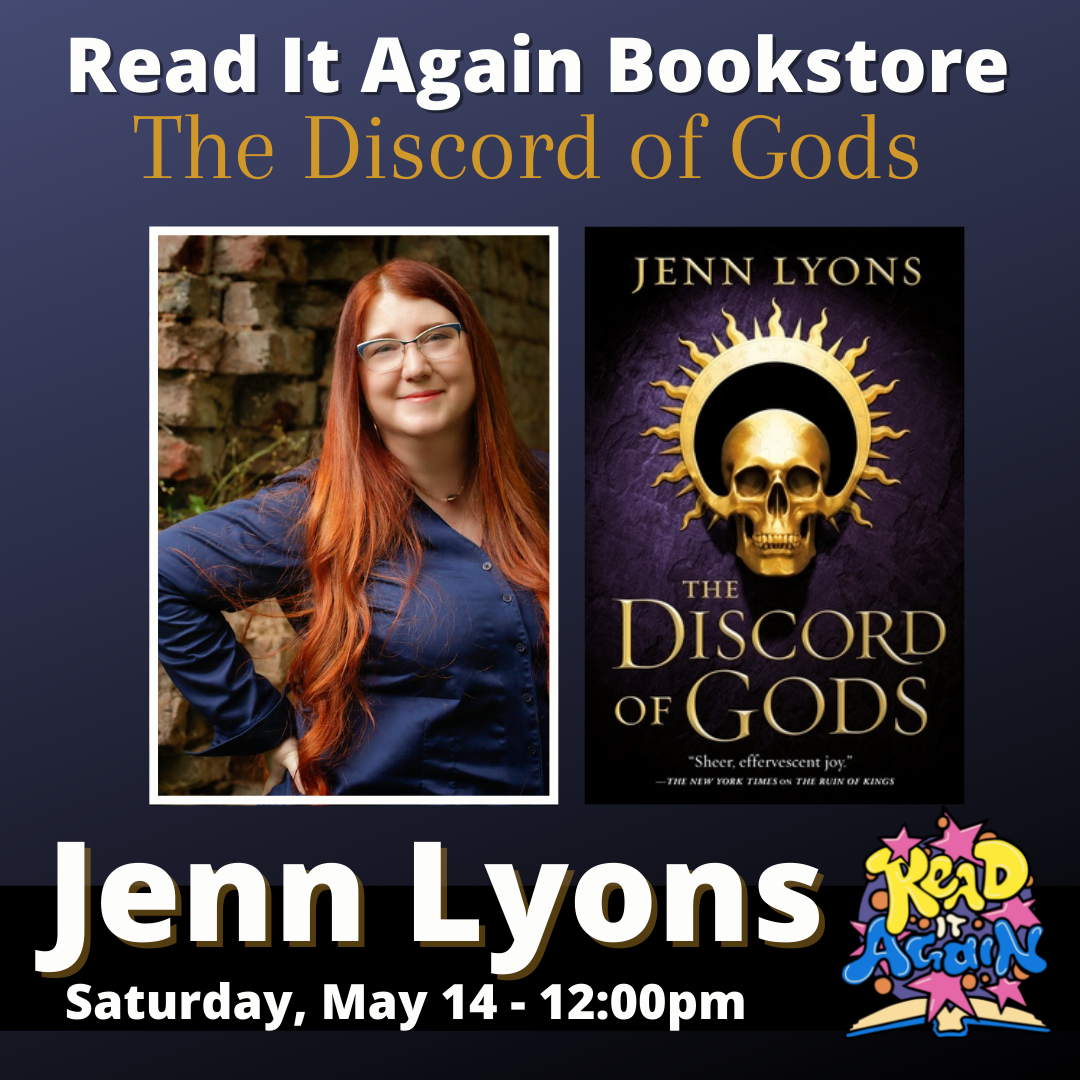 Read It Again Bookstore is excited to welcome back one of our favorite authors, Jenn Lyons. Jenn will be here Saturday, May 14th at 12 pm to promote her latest book, The Discord of Gods. This is the final book in her Chorus of Dragons series.

Jenn Lyons lives in Atlanta, Georgia with her husband, three cats, and a nearly infinite number of opinions on anything from Sumerian mythology to the correct way to make a martini. Formerly a video game producer, graphic designer, and art director, she now writes full-time. Lyons traces her geek roots back to playing first edition Dungeons & Dragons in grade school and reading her way from A to Z in the school’s library.

The Ruin of Kings, The Name of All Things, The Memory of Souls, and The House of Always, the first four books in Lyons’s five-book debut epic fantasy series from Tor Books, A Chorus of Dragons, are available now. The last book in the series, The Discord of Gods, drops on April 26, 2022.

The Discord of Gods marks the epic conclusion to Jenn Lyons's Chorus of Dragons series, closing out the saga that began with The Ruin of Kings, for fans of Brandon Sanderson and Patrick Rothfuss.

The Discord of Gods (A Chorus of Dragons, 5)

THEIR CONFLICT COULD END THEM ALL.

Relos Var's final plans to enslave the universe are on the cusp of fruition. He believes there's only one being in existence that might be able to stop him: the demon Xaltorath.

As these two masterminds circle each other, neither is paying attention to the third player on the board, Kihrin. Unfortunately, keeping himself classified in the 'pawn' category means Kihrin must pretend to be everything the prophecies threatened he'd become: the destroyer of all, the sun eater, a mindless, remorseless plague upon the land. It also means finding an excuse to not destroy the people he loves (or any of the remaining Immortals) without arousing suspicion.

Kihrin's goals are complicated by the fact that not all of his 'act' is one. His intentions may be sincere, but he's still being forced to grapple with the aftereffects of the corrupted magic ritual that twisted both him and the dragons. Worse, he's now tied to a body that is the literal avatar of a star ― a form that is becoming increasingly, catastrophically unstable. All of which means he's running out of time.

After all, some stars fade ― but others explode.

The Discord of Gods (A Chorus of Dragons #5) (Hardcover)

The House of Always (A Chorus of Dragons #4) (Hardcover)

The Memory of Souls (A Chorus of Dragons #3) (Mass Market)

The Ruin of Kings (A Chorus of Dragons #1) (Mass Market)