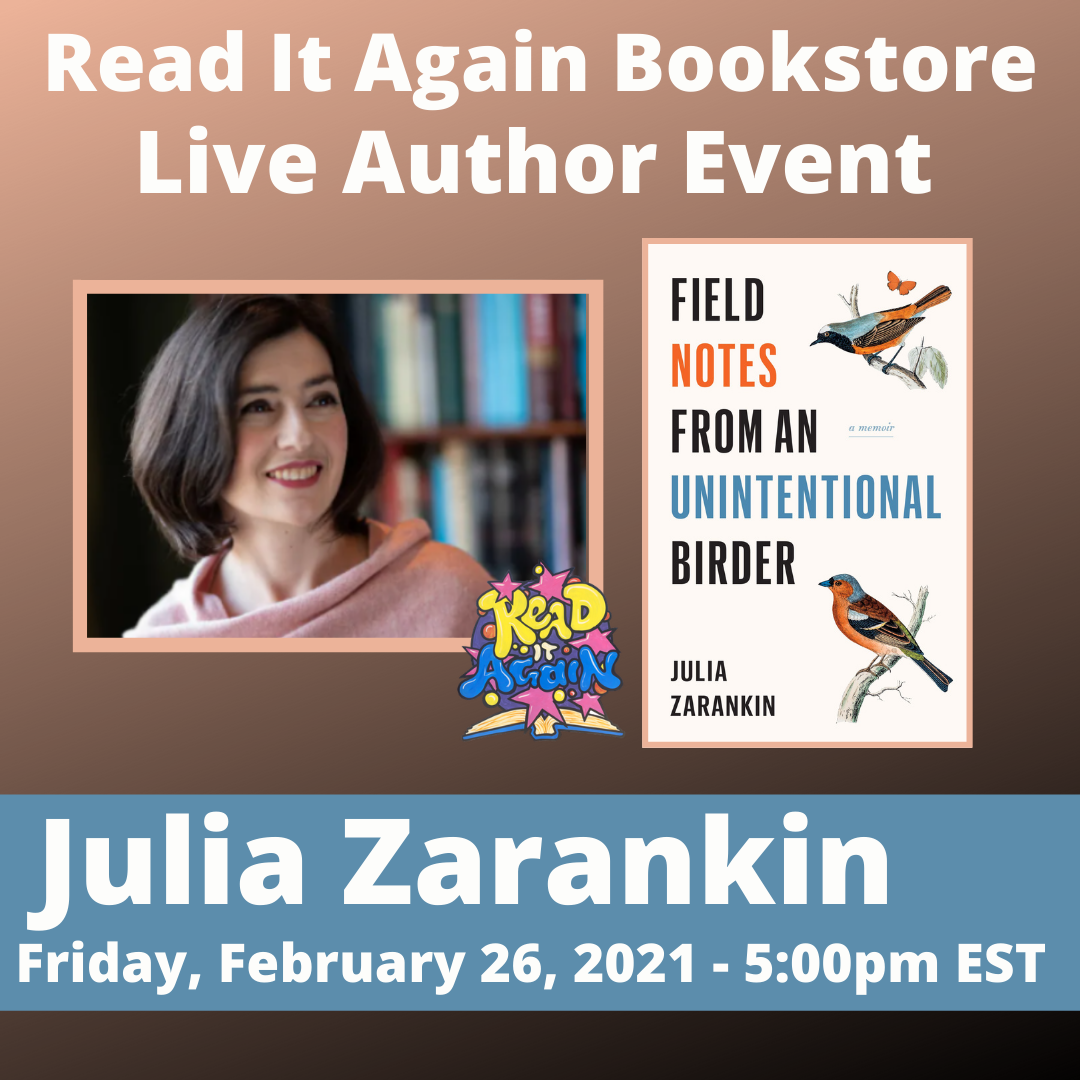 Read It Again Bookstore is SO excited to welcome Julia Zarankin to our Live Author Series. Her book, Field Notes from an Unintentional Birder was amazing and we can't wait to talk to Julia about it. Join us Friday, February 26th at 5pm for our conversion. You don't want to miss out, this is going to be a fun interview.

Field Notes from an Unintentional Birder: A Memoir

A writer discovers an unexpected passion for birding, along with a new understanding of the world and her own place in it.

When Julia Zarankin saw her first red-winged blackbird at the age of thirty-five, she didn’t expect that it would change her life. Recently divorced and auditioning hobbies during a stressful career transition, she stumbled on birdwatching, initially out of curiosity for the strange breed of humans who wear multi-pocketed vests, carry spotting scopes and discuss the finer points of optics with disturbing fervor. What she never could have predicted was that she would become one of them. Not only would she come to identify proudly as a birder, but birding would ultimately lead her to find love, uncover a new language and lay down her roots.

Field Notes from an Unintentional Birder tells the story of finding meaning in midlife through birds. The book follows the peregrinations of a narrator who learns more from birds than she ever anticipated, as she begins to realize that she herself is a migratory species: born in the former Soviet Union, growing up in Vancouver and Toronto, studying and working in the United States and living in Paris. Coming from a Russian immigrant family of concert pianists who believed that the outdoors were for “other people,” Julia Zarankin recounts the challenges and joys of unexpectedly discovering one’s wild side and finding one’s tribe in the unlikeliest of places.

Zarankin’s thoughtful and witty anecdotes illuminate the joyful experience of a new discovery and the surprising pleasure to be found while standing still on the edge of a lake at six a.m. In addition to confirmed nature enthusiasts, this book will appeal to readers of literary memoir, offering keen insight on what it takes to find one’s place in the world.

Julia Zarankin is a writer and self-proclaimed birdsplainer with a particular fondness for sewage lagoons. Her writing has appeared in The Walrus, Orion Magazine, Threepenny Review, Antioch Review, Birding Magazine, Maisonneuve, The New Quarterly, Ontario Nature and The Globe and Mail. Zarankin’s essays are also featured in several anthologies. She won the Eden Mills Writers’ Festival nonfiction prize and has been first runner-up for PRISM International’s nonfiction prize, a finalist for the TNQ Edna Staebler Personal Essay Contest and twice longlisted for the CBC Nonfiction Prize. Her birding/life aspirations: “To sport the hairdo of a Cedar Waxwing, acquire the wardrobe of a Northern Flicker and develop the confidence of a Ross’s Goose.” She lives in Toronto, ON.

"Life-affirming, thoughtful, and thoroughly delightful, this book celebrates self-acceptance and the joy of living an unexpected life." —Kirkus Reviews

"This sense of wonder in the ordinary permeates Field Notes From an Unintentional Birder, a thoughtful, engaging and sometimes humorous memoir." —Laurie Hertzel, Minneapolis Star Tribune

“Everyone who loves birds has arrived at their interest by a unique route, but few can describe their journey with the eloquence that Julia Zarankin brings to this sparkling memoir. With humor and poignancy, she tells a deeply personal story that manages to shine a light on universal themes.” —Kenn Kaufman, author of A Season on the Wind and Kingbird Highway

"Bird watchers will adore this painting of their craft, while other readers might be tempted to raise their eyes and perk their ears to better see and hear the birds." —Aron Row, Portland Book Review

“This moving, quirky memoir isn’t about birds so much as falling in love with the world, its everyday wonders and absurdities. With refreshing candour and curiosity, Julia Zarankin shows us how to pay attention—to what we hope to see, and above all, to the unexpected.” —Kate Harris, author of Lands of Lost Borders

“Julia Zarankin is a delight, and so is her witty, charming, self-deprecating memoir, Field Notes from an Unintentional Birder. By turns hilarious and moving, it traces Julia’s journey—almost against her will—into the world of birds and birding, where she ultimately finds a reflection of herself in the feathered migrants by which she becomes enthralled.” —Scott Weidensaul, author of Living on the Wind

“A love song to the beauty of birding and a reminder that we should all spend more time looking up.” —Anne Bokma, author of My Year of Living Spiritually

"I found the book to be a most enjoyable read, with multiple benefits including plenty of miles following along with the author on her birding adventures, both of us gaining insight as she goes." —Jim Lyons, Golden Eagle Audubon Society

You can join the conversation here: https://www.youtube.com/watch?v=sxYNLwR4wiA

Field Notes from an Unintentional Birder: A Memoir (Paperback)