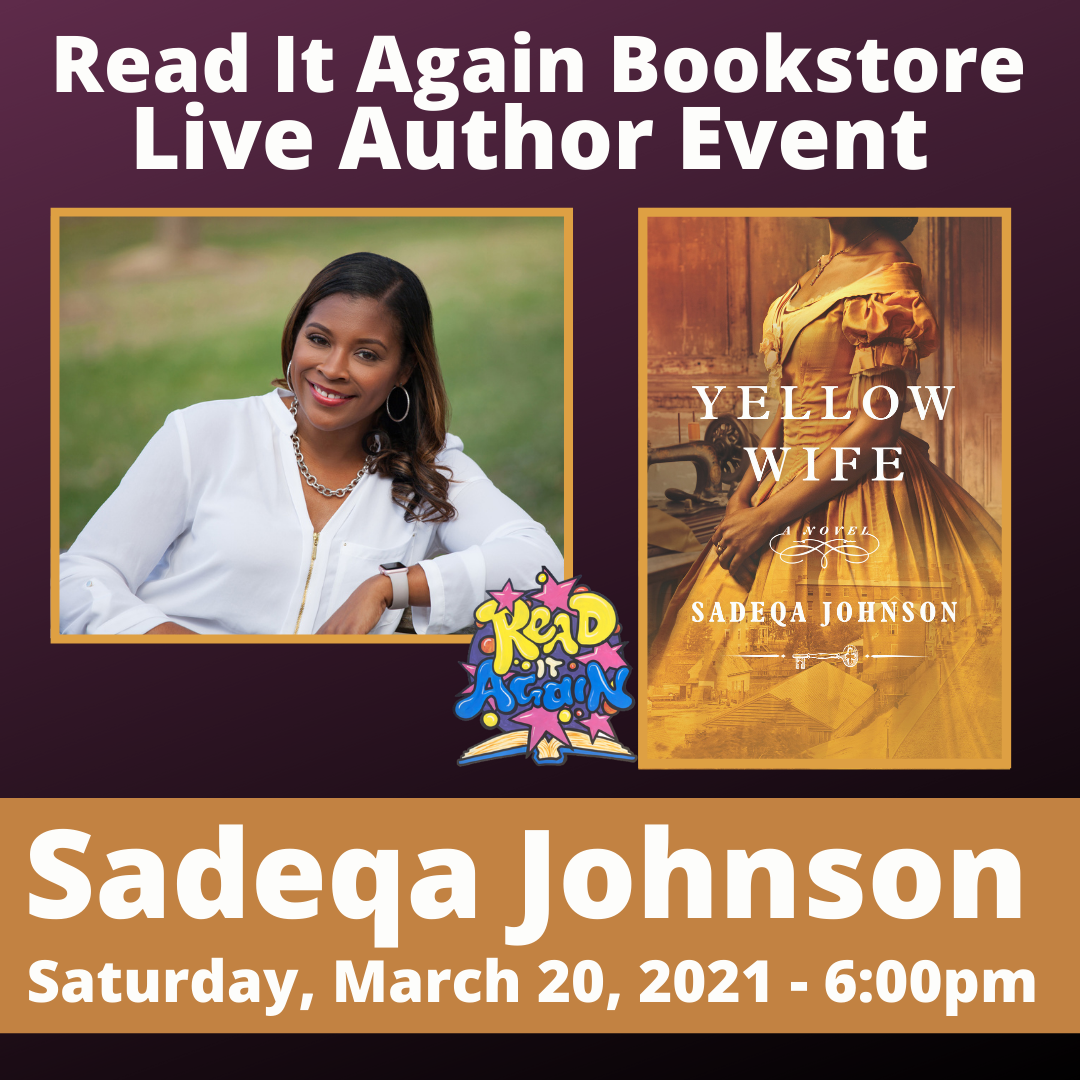 Read It Again Bookstore is very excited to welcome Sadeqa Johnson to our live online author series! Join us Saturday, March 20 at 6:00pm EST for our discussion about Sadeqa's new book, Yellow Wife.

You can join this event here: https://www.youtube.com/watch?v=-U30uvUrTbQ

Sadeqa Johnson is the award-winning author of four novels. Her accolades include being the recipient of the National Book Club Award, the Phillis Wheatley Award and the USA Best Book Award for best fiction. She is a Kimbilo Fellow and a Tall Poppy Writer. Originally from Philadelphia, she currently lives near Richmond, Virginia, with her husband and three children. To learn more, visit www.sadeqajohnson.net.

“A fully immersive, intricately crafted story inspired by the pages of history. In Pheby, Sadeqa Johnson has created a woman whose struggle to survive and to protect the ones she loves will have readers turning the pages as fast as their fingers can fly. Simply enthralling.” —Lisa Wingate, #1 New York Times bestselling author of Before We Were Yours

Born on a plantation in Charles City, Virginia, Pheby Delores Brown has lived a relatively sheltered life. Shielded by her mother’s position as the estate’s medicine woman and cherished by the Master’s sister, she is set apart from the others on the plantation, belonging to neither world.

She’d been promised freedom on her eighteenth birthday, but instead of the idyllic life she imagined with her true love, Essex Henry, Pheby is forced to leave the only home she has ever known. She unexpectedly finds herself thrust into the bowels of slavery at the infamous Devil’s Half Acre, a jail in Richmond, Virginia, where the enslaved are broken, tortured, and sold every day. There, Pheby is exposed not just to her Jailer’s cruelty but also to his contradictions. To survive, Pheby will have to outwit him, and she soon faces the ultimate sacrifice.

Love in a Carry-On Bag (Paperback)

And Then There Was Me: A Novel of Friendship, Secrets and Lies (Hardcover)