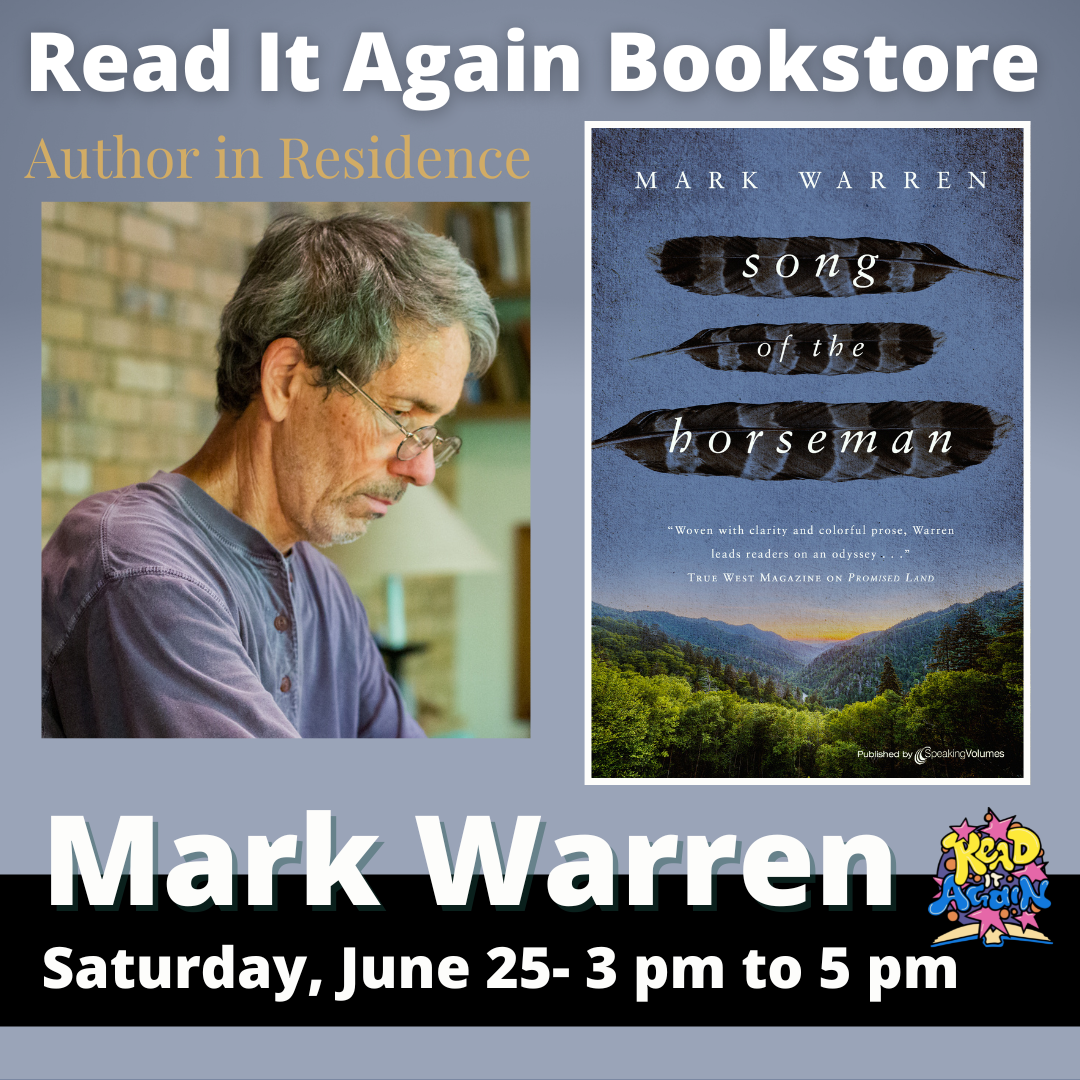 We are very excited to welcome back Mark Warren to Read It Again Bookstore! Join us on June 25th from 3 to 5 pm for a meet and greet with the author of Song of the Horseman! Song of the Horseman is the reason Mark Warren was nominated for GA Author of the Year! Mark is such an interesting person, you should come by and meet him. We know our customers are going to love him!

Mark Warren is a graduate of the University of Georgia. At Medicine Bow, his nationally renowned wilderness school in the Southern Appalachians, he teaches nature classes and survival skills of the Cherokees. The National Wildlife Federation named him Georgia’s Conservation Educator of the Year in 1980. In 1998 Mark became the U.S. National Champion in whitewater canoeing, and in 1999 he won the World Championship Longbow title.

Warren has written extensively about nature for local and national magazines. He lectures on Native American history and survival skills, and Western Frontier History presenting at museums and cultural centers around the country. He is a member of the Wild West History Association, and Western Writers of America. His Wyatt Earp, An American Odyssey trilogy was honored by WWA’s Spur Awards, The Historical Novel Society and the 2020 Will Rogers Medallion Awards under the original hardback editions, Born to the Badge (2018) and Promised Land (2019.) He is a double nominee for the 2022 Georgia Author of the Year Award for Song of the Horseman, and Indigo Heaven.

His published books include: from Lyons Press, Two Winters in a Tipi and Secrets of the Forest (a four volume series on nature and primitive skills), from Five Star – Gale Cengage and Two Dot, Wyatt Earp, An American Odyssey (an historical fiction  trilogy on the life of Wyatt Earp), from Five Star – Gale Cengage, Indigo Heaven, The Cowboy, The Librarian and the Broomsman from the anthology Librarians of the West: A Quartet, Westering Trail Travesties, and A Last Serenade for Billy Bonney, and from Speaking Volumes, Song of the Horseman, Last of the Pistoleers and A Tale Twice Told.

Song of the Horseman

Award-winning writer of Wyatt Earp, An American Odyssey, winner of the 2020 Will Rogers Medallion Award, a 2019 Spur Award Finalist and an "Editor's Choice" by The Historical Novel Society

In 1941 Jonas Walks-Through-the-Storm, a full-blooded Cherokee horse trainer in rural North Carolina, trains an equestrian unit at Camp Tuckasegee. As he straddles the racist divide while working with white men, a mutual love develops between him and the wife of an officer.

In modern-day Chicago, Jonas's one-quarter-native grandson, Russell, battles racism of another color. As a teacher at a mostly black school, he burns out in work, marriage, and self-esteem by sliding into alcoholic dissolution. Divorce, dismissal, and dejection quickly follow. Trying to exhume his self-respect, Russell attempts to revive his lineage through a self-imposed "trial by fire" alone in a night forest. This ceremony leads to a journey to retrace his grandfather's story.

Due to a past scandal, memories of Jonas have been erased in Russell's family. Yet Russell's childhood excursions with his grandfather persist. Wandering across Illinois and Wisconsin he interviews the people who knew Jonas and discovers a chain of sobering tragedies.

When the search leads to North Carolina's mountains, Russell comes full circle to his grandfather's old homestead and discovers the love and purpose that the old man had bequeathed to him through a kinship with the land . . . and a brotherhood with horses.

"A good book offers the ultimate escape . . . armchair travel to those wild places of the imagination. Warren's book took me to places I had previously not expected to visit, but I'm really glad I went there. - New Zealand Booklovers on Promised Land

"Warren's novel paints a vivid picture . . . and its colorful similes will put a smile on any genre-fiction lover's face." - Booklist on Born to the Badge

Song of the Horseman (Paperback)