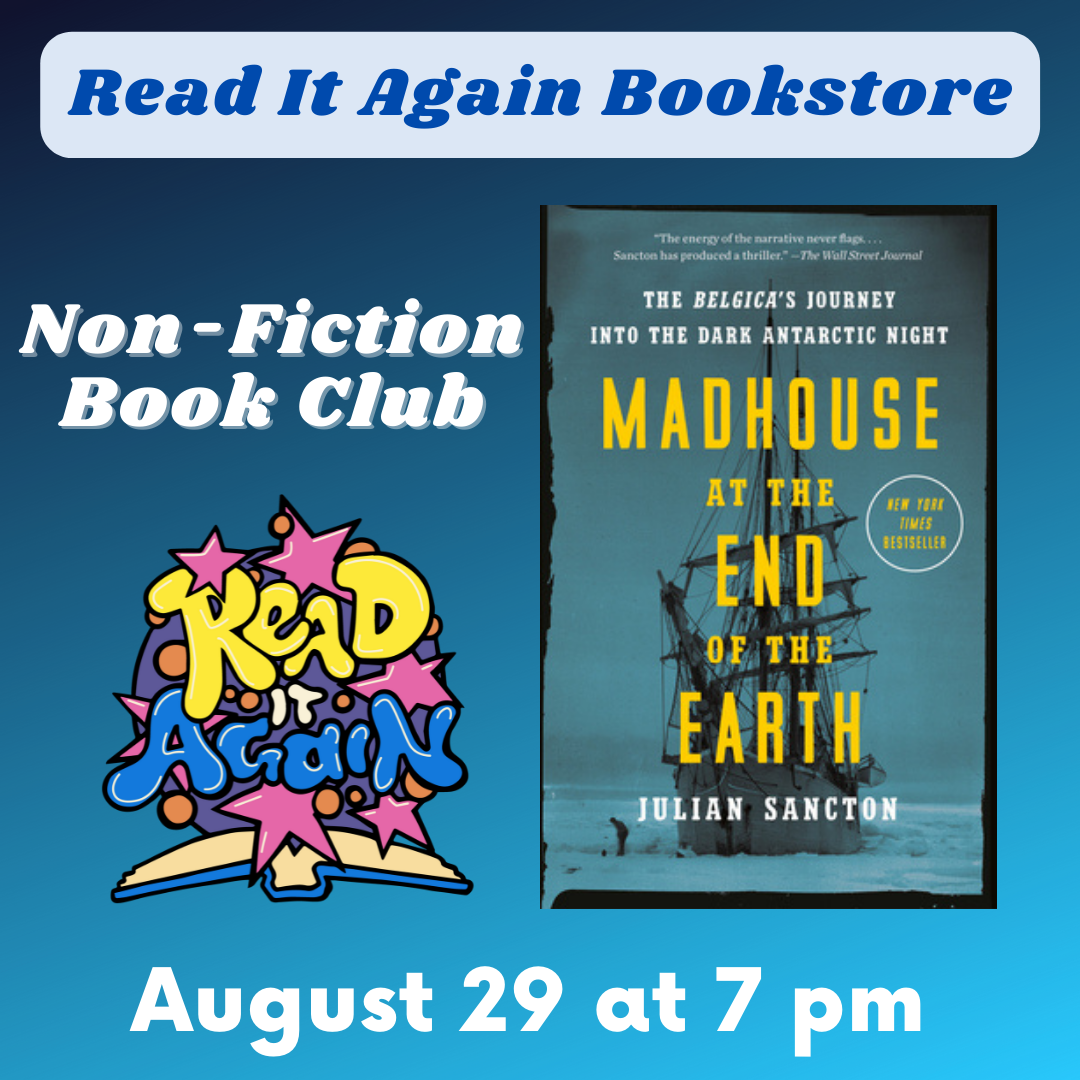 Join us on August 29th at 7:00 pm for our Non-Fiction Book Club's discussion of Madhouse at the End of the Earth

In August 1897, the young Belgian commandant Adrien de Gerlache set sail for a three-year expedition aboard the good ship Belgica with dreams of glory. His destination was the uncharted end of the earth: the icy continent of Antarctica.

But de Gerlache’s plans to be first to the magnetic South Pole would swiftly go awry. After a series of costly setbacks, the commandant faced two bad options: turn back in defeat and spare his men the devastating Antarctic winter, or recklessly chase fame by sailing deeper into the freezing waters. De Gerlache sailed on, and soon the Belgica was stuck fast in the icy hold of the Bellingshausen Sea. When the sun set on the magnificent polar landscape one last time, the ship’s occupants were condemned to months of endless night. In the darkness, plagued by a mysterious illness and besieged by monotony, they descended into madness.

In Madhouse at the End of the Earth, Julian Sancton unfolds an epic story of adventure and horror for the ages. As the Belgica’s men teetered on the brink, de Gerlache relied increasingly on two young officers whose friendship had blossomed in captivity: the expedition’s lone American, Dr. Frederick Cook—half genius, half con man—whose later infamy would overshadow his brilliance on the Belgica; and the ship’s first mate, soon-to-be legendary Roald Amundsen, even in his youth the storybook picture of a sailor. Together, they would plan a last-ditch, nearly certain-to-fail escape from the ice—one that would either etch their names in history or doom them to a terrible fate at the ocean’s bottom.

Drawing on the diaries and journals of the Belgica’s crew and with exclusive access to the ship’s logbook, Sancton brings novelistic flair to a story of human extremes, one so remarkable that even today NASA studies it for research on isolation for future missions to Mars. Equal parts maritime thriller and gothic horror, Madhouse at the End of the Earth is an unforgettable journey into the deep.

Julian Sancton is a writer and editor whose work has appeared in Vanity Fair, Esquire, GQ, The New Yorker, Departures, and Playboy, among other publications. He has reported from every continent, including Antarctica, which he first visited while researching this book. He lives in Larchmont, New York, with his partner, Jessica, and their two daughters.

Madhouse at the End of the Earth: The Belgica's Journey into the Dark Antarctic Night (Paperback)