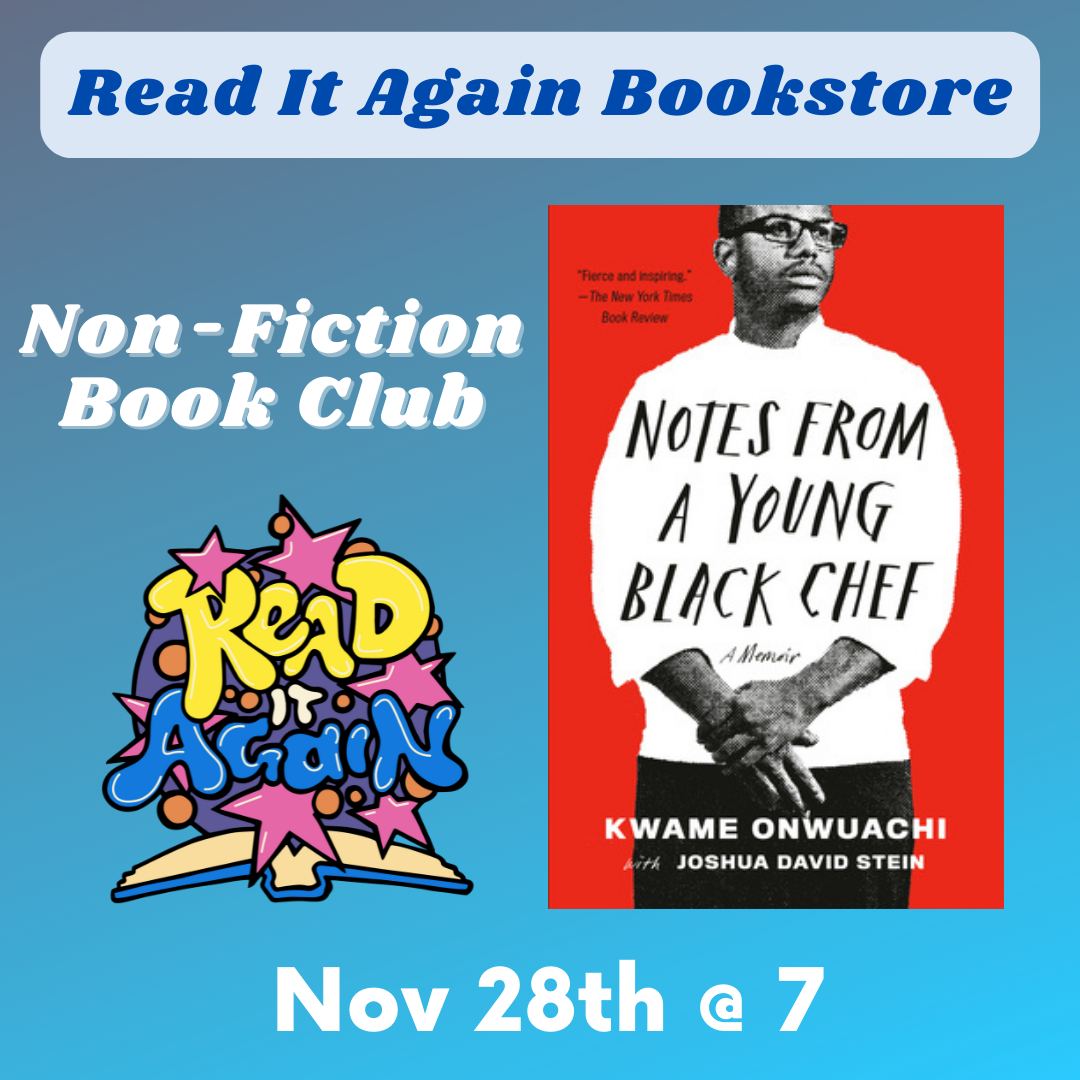 Join us on November 28th at 7:00 pm in the store for our Non-Fiction Book Club's discussion of Notes from a Young Black Chef,  by Kwame Onwuachi writing with Joshua David Stein.

“Kwame Onwuachi’s story shines a light on food and culture not just in American restaurants or African American communities but around the world.” —Questlove

By the time he was twenty-seven years old, Kwame Onwuachi had opened—and closed—one of the most talked about restaurants in America. He had sold drugs in New York and been shipped off to rural Nigeria to “learn respect.” He had launched his own catering company with twenty thousand dollars made from selling candy on the subway and starred on Top Chef.

Through it all, Onwuachi’s love of food and cooking remained a constant, even when, as a young chef, he was forced to grapple with just how unwelcoming the food world can be for people of color. In this inspirational memoir about the intersection of race, fame, and food, he shares the remarkable story of his culinary coming-of-age; a powerful, heartfelt, and shockingly honest account of chasing your dreams—even when they don’t turn out as you expected.

Kwame Onwuachi is the James Beard Award-winning executive chef at Kith/Kin in Washington, D.C. He was born on Long Island and raised in New York City, Nigeria, and Louisiana. Onwuachi was first exposed to cooking by his mother, in the family’s modest Bronx apartment, and he took that spark of passion and turned it into a career. From toiling in the bowels of oil cleanup ships to working at some of the best restaurants in the world, he has seen and lived his fair share of diversity. Onwuachi trained at the Culinary Institute of America and opened five restaurants before turning thirty. A former Top Chef contestant, he has been named Esquire’s Chef of the Year, one of Food & Wine’s Best New Chefs, and a 30 Under 30 honoree by both Zagat and Forbes.

Joshua David Stein is a Brooklyn-based author and journalist. He is the co-author of Food & Beer, the U.S. editor of Where Chefs Eat, the author of forthcoming To Me He Was Just Dad as well as the children’s books, Can I Eat That?, What’s Cooking?, Brick: Who Found Herself in Architecture and The Ball Book. Stein was previously the restaurant critic for the New York Observer and the Village Voice. He is the founding member of The Band Books and the food zine, Reduced Circumstance.

“Notes from a Young Black Chef might be the literary heir to Kitchen Confidential. . . . With the same mix of brutal honesty, behind-the-scenes anecdotes, and atmosphere-conjuring prose. But Onwuachi’s story is completely his own.” —Entertainment Weekly

“Onwuachi’s memoir should be required reading, not just for future chefs, but for anyone who wants a glimpse into one man’s tale of what it’s like to be young, black and ambitious in America.” —The Washington Post

“A fascinating book. . . . I hope everybody reads it.” —Trevor Noah, The Daily Show with Trevor Noah

“Kwame Onwuachi’s story shines a light on food and culture not just in American restaurants or African American communities but around the world.” —Questlove

“This is an astonishing and open-hearted story from one of the next generation’s stars of the culinary world.” —José Andrés

“A young black chef’s raw and gritty tale of survival, ingenuity, and hustling. Kwame takes us on this journey where he eventually finds himself captivated by the culinary world of fine dining.” —Carla Hall, author of Carla Hall’s Soul Food: Everyday and Celebration

“This is the future of Black food writing and a new chapter in the saga of how chefs come of age.” —Michael W. Twitty, author of The Cooking Gene: A Journey Through African American Culinary History in the Old South

“An inspiring tell-all about the reality of being a young Black chef in the world of fine dining and all the roads taken to become a culinary sensation.” —Edouardo Jordan, chef/owner of Salare, Junebaby, and Lucinda Grain Bar

“With Notes From a Young Black Chef, Kwame Onwuachi proves that 29 isn’t too young to write a memoir.” —Eater

“Kwame is a chef giving a lot more than notes in this remarkable story. His candor and refreshing point of view tell a story of guts and passion from a chef who translates his expertise, where we all can learn from his stories.” —Joseph “JJ” Johnson, chef/founder, Fieldtrip

“[A] must-read book that is an honest look at race in the world of food and restaurants.” —Winston-Salem Journal

“Kwame Onwuachi has lived two or three lifetimes in his journey thus far and recounts them with humor, insight, and honesty in Notes from a Young Black Chef. It’s Kitchen Confidential from a Black point of view.” —Jessica B. Harris, author of My Soul Looks Back

“Remarkable. . . . [Onwuachi’s] story, told in small bites of vignettes and recipes, is filled with influences and flavors.” —Raleigh News & Observer

“You couldn’t ask the universe for a more colorful creative culinary adventurer than chef Kwame, who blends the stories and history of his African and African American heritage into a literary pot of brilliant cultural flavors.” —Alexander Smalls, coauthor of Between Harlem and Heaven

“Eat this book! It satiates all five taste points. It is a generational cultural roux; dusky dark, and deeply flavored.” —Alfre Woodard

Notes from a Young Black Chef: A Memoir (Paperback)