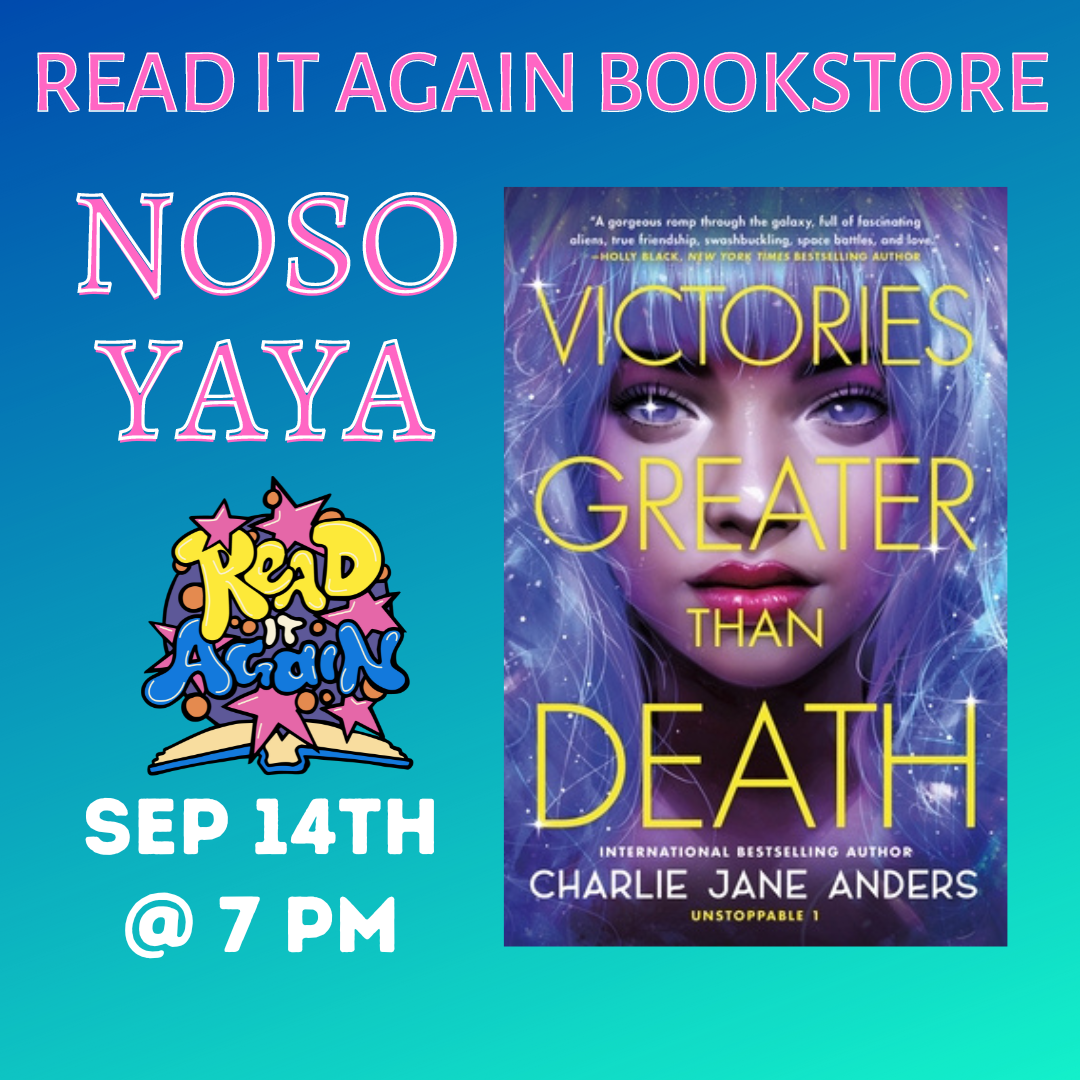 Join us on September 14th at 7 pm for our NoSoYAYA Book Club's discussion of Victories Greater Than Death by Charlie Jane Anders.

Outsmart Your Enemies. Outrun the Galaxy.

“Just please, remember what I told you. Run. Don’t stop running for anything.”

Buckle up your seatbelt for Victories Greater Than Death, a thrilling YA sci-fi adventure set against an intergalactic war from internationally bestselling author Charlie Jane Anders.

Tina never worries about being 'ordinary'--she doesn't have to, since she's known practically forever that she's not just Tina Mains, average teenager and beloved daughter. She's also the keeper of an interplanetary rescue beacon, and one day soon, it's going to activate, and then her dreams of saving all the worlds and adventuring among the stars will finally be possible. Tina's legacy, after all, is intergalactic--she is the hidden clone of a famed alien hero, left on Earth disguised as a human to give the universe another chance to defeat a terrible evil.

But when the beacon activates, it turns out that Tina's destiny isn't quite what she expected. Things are far more dangerous than she ever assumed--and everyone in the galaxy is expecting her to actually be the brilliant tactician and legendary savior Captain Thaoh Argentian, but Tina....is just Tina. And the Royal Fleet is losing the war, badly--the starship that found her is on the run and they barely manage to escape Earth with the planet still intact.

Luckily, Tina is surrounded by a crew she can trust, and her best friend Rachel, and she's still determined to save all the worlds. But first she'll have to save herself.

Charlie Jane Anders is the author of Victories Greater Than Death, the first book in the young-adult Unstoppable trilogy, along with the short story collection Even Greater Mistakes. Her other books include The City in the Middle of the Night and All the Birds in the Sky. Her fiction and journalism have appeared in The New York Times, The Washington Post, Slate, McSweeney's, Mother Jones, the Boston Review, Tor.com, Tin House, Conjunctions, Wired Magazine, and other places. Her TED Talk, "Go Ahead, Dream About the Future" got 700,000 views in its first week. With Annalee Newitz, she co-hosts the podcast Our Opinions Are Correct.