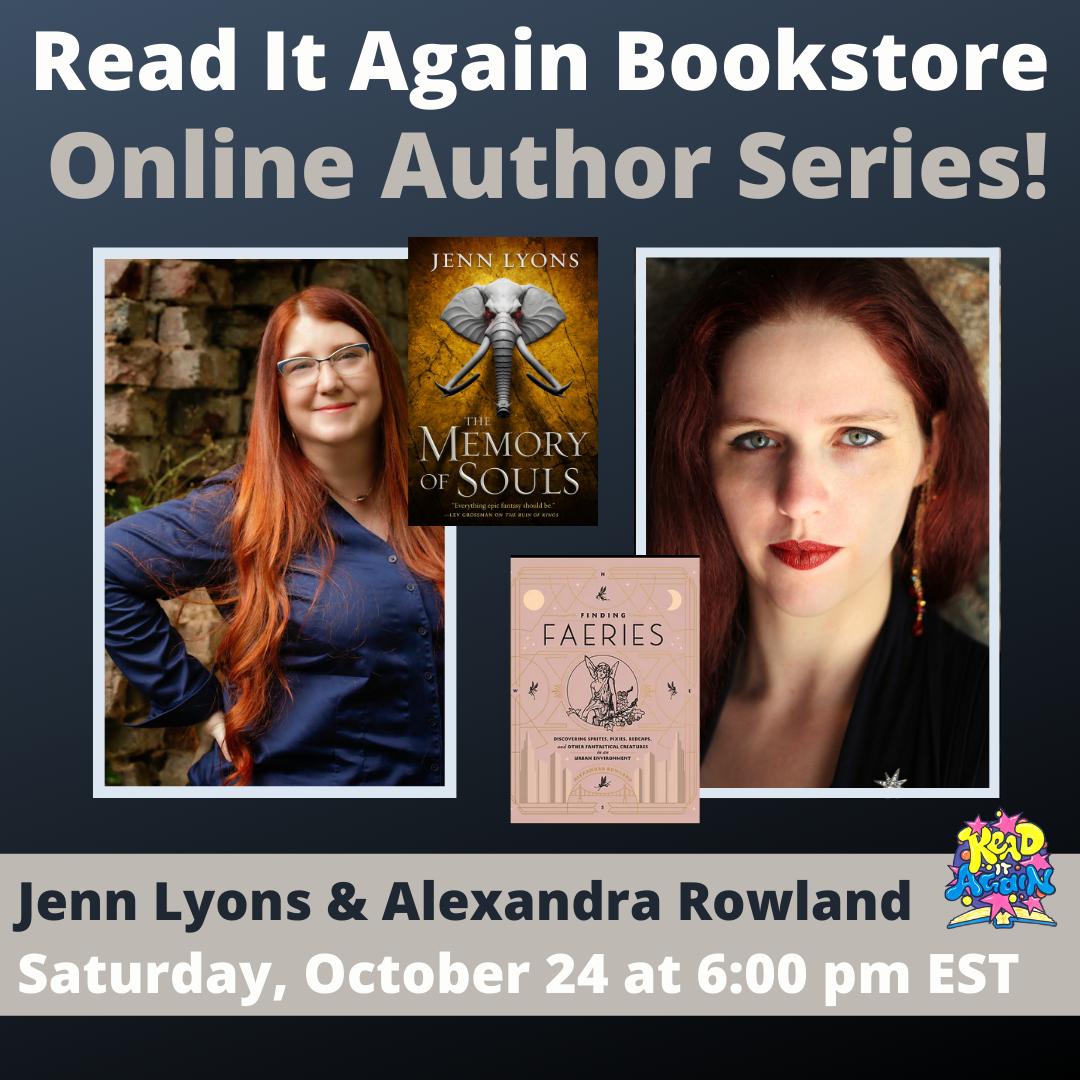 Read It Again Bookstore is very excited to welcome Jenn Lyons and Alexandra Rowland!  Join us Saturday, October 24, at 6:00 pm EST for a fun conversation about writing, speculative fiction and common interests.

Alexandra Rowland is the author of A Conspiracy Of Truths, A Choir Of Lies, and Finding Faeries, as well as a cohost of the Hugo Award nominated podcast Be the Serpent, all sternly supervised by their feline quality control manager. They hold a degree in world literature, mythology, and folklore from Truman State University.

Discover where faeries and other mythical creatures are hiding in our modern, urban environment with this beautifully illustrated guide to uncovering magical beings.

Finding Faeries
From the musty corners of libraries to the darkest depths of urban sewers, faeries, boggarts, redcaps, and other fantastical species can be found all around us—but only if we know where to look. And like every other being in the modern world, these wonderous creatures have been forced to adapt to the climate, industrial, and cultural changes of the modern era. Many formerly common creatures from akeki to cave trolls have been driven out by the urban sprawl, technological advancements, and climate change while others, including ether sprites and brownies, have been able to thrive in abundance, creating homes within electrical hotbeds and massive landfills.

Featuring descriptions of magical creatures from around the globe, this encyclopedic collection details the history and adaptability of more than fifty different species of fae. Describing little-known and fascinating creatures such as the Luck Pigeon of Baltimore, the Ghost Cat of India, and the Brain Sucker of South Africa, this book will expose readers to fantastical species from a variety of cultures and communities.

Combining scholarship with modern lore and environmentalism, and featuring stunning hand-drawn illustrations, Finding Faeries is a captivating look at the fantastical beings that inhabit our world today.

Jenn Lyons lives in Atlanta, Georgia with her husband, three cats, and a nearly infinite number of opinions on anything from mythology to the correct way to make a martini. The Ruin of Kings and the Name of All Things, the first two books in Lyons’s five-book debut epic fantasy series from Tor Books, A Chorus of Dragons, are available now. The third book in the series, the Memory of Souls, arrives August 2020.

The Memory of Souls: A Chorus of Dragons, Book 3

The Memory of Souls is the third epic fantasy in Jenn Lyons’ Chorus of Dragons series.

What if you're the one who has to die?

Now that Relos Var's plan to free the dark god Vol Karoth has been revealed, and with more demons rampaging across Quur every day, the end of the world is closer than ever.

To buy time for humanity, Kihrin, Janel, and Thurvishar must convince the king of the Manol vané to perform an ancient ritual that will strip the vané of their immortality - a ritual that certain vané will do anything to prevent. Including assassinating the ones bringing the news.

Worse, Kihrin must come to terms with the horrifying possibility that his connection to Vol Karoth is steadily growing in strength. How can Kihrin hope to save anyone when he might turn out to be the greatest threat of them all?

A Chorus of Dragons series:

The Memory of Souls (A Chorus of Dragons #3) (Hardcover)

A Choir of Lies (Paperback)

A Conspiracy of Truths (Paperback)