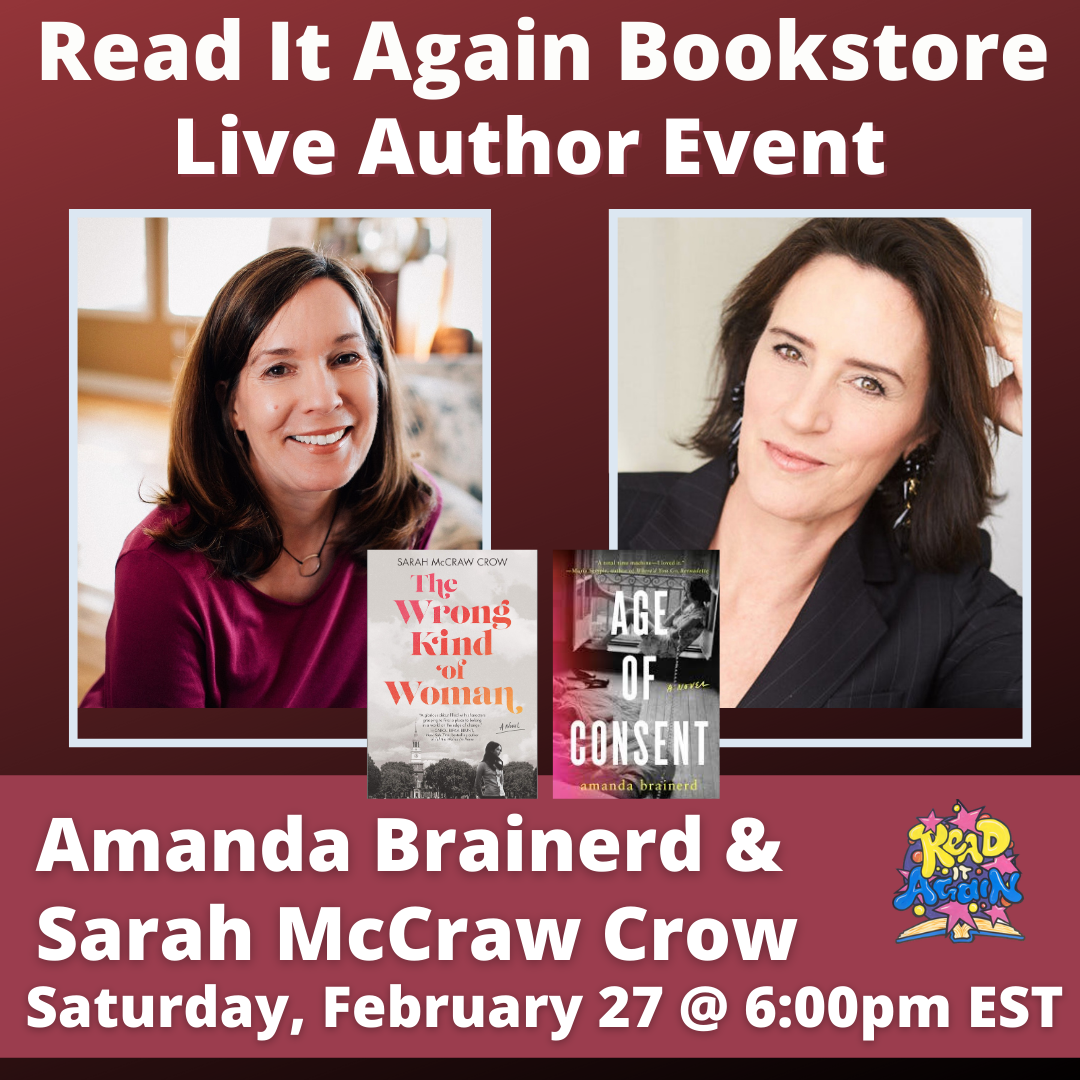 Read It Again Bookstore is excited to welcome back Sarah McCraw Crow to our online author series. This time she will be joined by her friend and fellow author, Amanda Brainerd. You can join us Saturday, February 27th at 6pm for a discussion about their new books: The Wrong Kind of Woman and Age of Consent.

You can join this event here: https://www.youtube.com/watch?v=qIxkSXamVl8

Amanda Brainerd lives on the Upper East Side of Manhattan with her husband and three children, blocks from where she grew up. Amanda attended The Nightingale- Bamford School and was expelled from Choate Rosemary Hall, before going on to graduate from Harvard College and Columbia Architecture. Age of Consent is her first novel.

Named One of the Best Books of the Summer by Good Morning America, Cosmopolitan, Harper's Bazaar, and PopSugar

It's 1983. David Bowie reigns supreme, and downtown Manhattan has never been cooler. But Justine and Eve are stuck at Griswold Academy, a Connecticut boarding school. Griswold is a far cry from Justine's bohemian life in New Haven, where her parents run a theater and struggle to pay the bills. Eve, the sophisticated daughter of status-obsessed Park Avenue parents, also feels like an outsider amidst Griswold's preppy jocks and debutantes. Justine longs for Eve's privilege, and Eve for Justine's sexual confidence. Despite their differences, they form a deep friendship, together grappling with drugs, alcohol, ill-fated crushes, and predatory male teachers.

After a tumultuous school year, Eve and Justine spend the summer in New York City where they join Eve's childhood friend India. Justine moves into India's Hell's Kitchen apartment and is pulled further into her friends' glamorous lives. Eve, under her parents' ever-watchful eye, interns at a SoHo art gallery and navigates the unpredictable whims of her boss. India struggles to resist the advances of a famous artist represented by the gallery. All three are affected by their sexual relationships with older men and the power adults hold over them, even as the young women begin to assert their independence.

Sarah McCraw Crow is the debut author of the novel The Wrong Kind of Woman. Her short stories, essays, book reviews, and articles have run in many magazines and literary journals. She's a graduate of Dartmouth College, Stanford University, and Vermont College of Fine Arts, and she lives on an old farm in New Hampshire with her family. When she's not reading or writing, she's probably out in the garden, or if it's winter, snowshoeing with Lila the dog.

The Wrong Kind of Woman-

“A glorious debut filled with characters grasping to find a place to belong in a world on the edge of change.” —Carol Rifka Brunt, New York Times bestselling author of Tell the Wolves I’m Home

“McCraw Crow deftly navigates the campus and national politics of the ’70s in a way that remains timely and pressing today. A powerful, thought-provoking debut.” —Amy Meyerson, Nationally bestselling author of The Bookshop of Yesterdays

In late 1970, Oliver Desmarais drops dead in his front yard while hanging Christmas lights. In the year that follows, his widow, Virginia, struggles to find her place on the campus of the elite New Hampshire men’s college where Oliver was a professor. While Virginia had always shared her husband’s prejudices against the four outspoken, never-married women on the faculty—dubbed the Gang of Four by their male counterparts—she now finds herself depending on them, even joining their work to bring the women’s movement to Clarendon College.

Soon, though, reports of violent protests across the country reach this sleepy New England town, stirring tensions between the fraternal establishment of Clarendon and those calling for change. As authorities attempt to tamp down “radical elements,” Virginia must decide whether she’s willing to put herself and her family at risk for a cause that had never felt like her own.

Told through alternating perspectives, The Wrong Kind of Woman is an engrossing story about finding the strength to forge new paths, beautifully woven against the rapid changes of the early ’70s.

Age of Consent: A Novel (Hardcover)

The Wrong Kind of Woman (Hardcover)