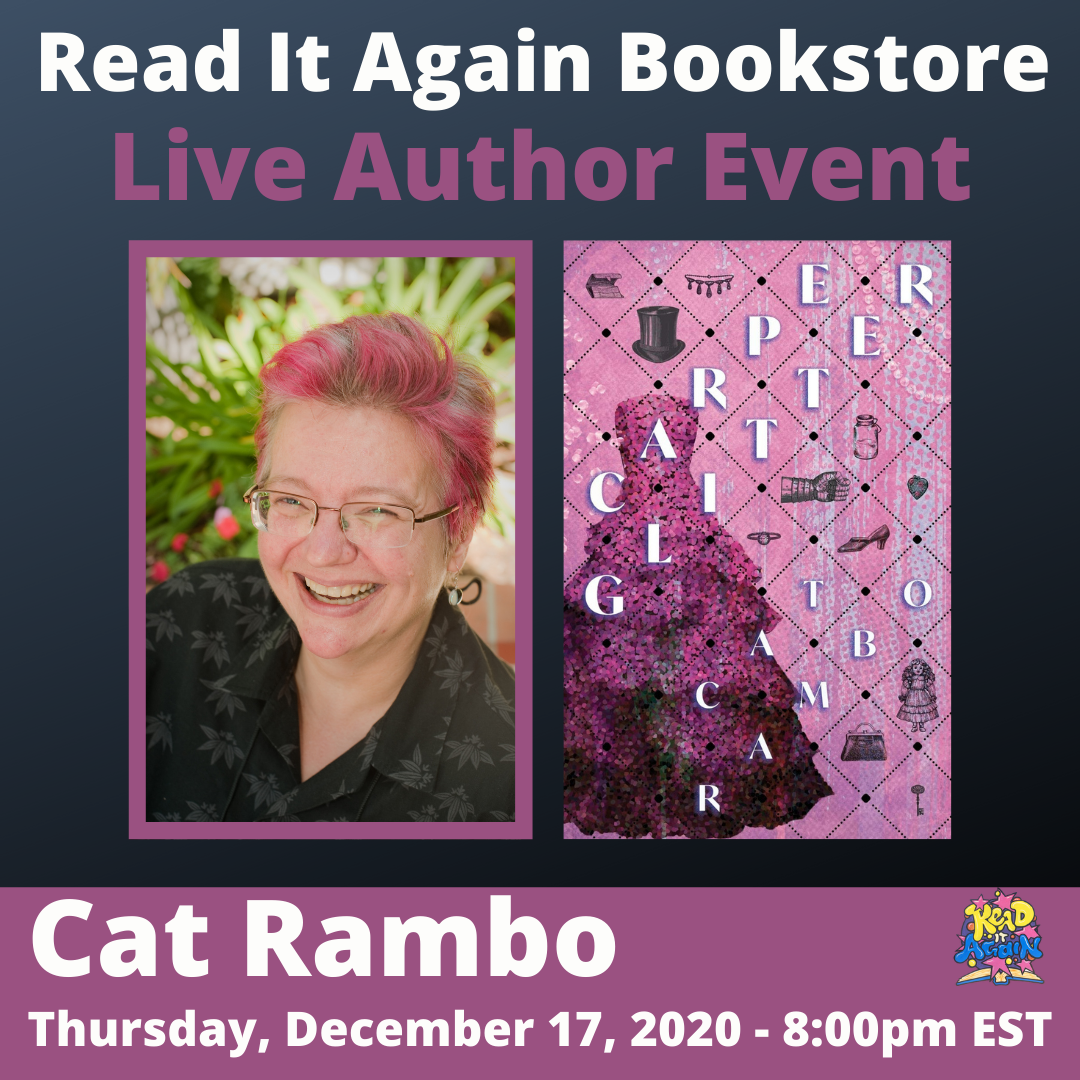 Read It Again is SUPER excited to welcome Cat Rambo to our online author series. Join us Thursday, December 17, 2020 - 8:00pm EST when we talk to Cat about her Nebula Award winning Novelette, Carpe Glitter.

You can join this event here- https://www.youtube.com/watch?v=MKOkMWB5BKg

Cat Rambo lives, writes, and edits in the Pacific Northwest. Her work has appeared in such places as Asimov's, Weird Tales, and Strange Horizons. She was the fiction editor of award-winning Fantasy Magazine (http://www.fantasy-magazine.com) and appeared on the World Fantasy Award ballot in 2012 for that work. Her story "Five Ways to Fall in Love on Planet Porcelain" was a 2012 Nebula Award finalist.

John Barth described Cat Rambo's writings as "works of urban mythopoeia" -- her stories take place in a universe where chickens aid the lovelorn, Death is just another face on the train, and Bigfoot gives interviews to the media on a daily basis. She has worked as a programmer-writer for Microsoft and a Tarot card reader, professions which, she claims, both involve a certain combination of technical knowledge and willingness to go with the flow. In 2005 she attended the Clarion West Writers' Workshop.

In 2007, her collaboration with Jeff VanderMeer, The Surgeon's Tale and Other Stories, appeared, while her first solo collection, Eyes Like Sky and Coal and Moonlight, was published in August of 2009 and was an Endeavour Award finalist. In 2012, her collection Near + Far appeared from Hydra House as well as a novella, A Seed Upon the Wind, as part of the Fathomless Abyss collaborative project. Her first novel, Beasts of Tabat, appeared in early 2015 from Wordfire Press, and the sequel, Hearts of Tabat, as well as story collection Neither Here Nor There, will appear later this year.

A frequent volunteer with the Science Fiction and Fantasy Writers of America, she is currently its president. Her most recent nonfiction work is Ad Astra: The SFWA 50th Anniversary Cookbook, co-edited with Fran Wilde.

A novelette from Cat Rambo, author of The Tabat Quartet. What do you do when someone else's past forces itself on your own life? Sorting through the piles left behind by a grandmother who was both a stage magician and a hoarder, Persephone Aim finds a magical artifact from World War II that has shaped her family history. Faced with her mother's desperate attempt to take the artifact for herself, Persephone must decide whether to hold onto the past--or use it to reshape her future.

Behind the Mask: An Anthology of Heroic Proportions (Paperback)

And the Last Trump Shall Sound: A Future History of America (Paperback)