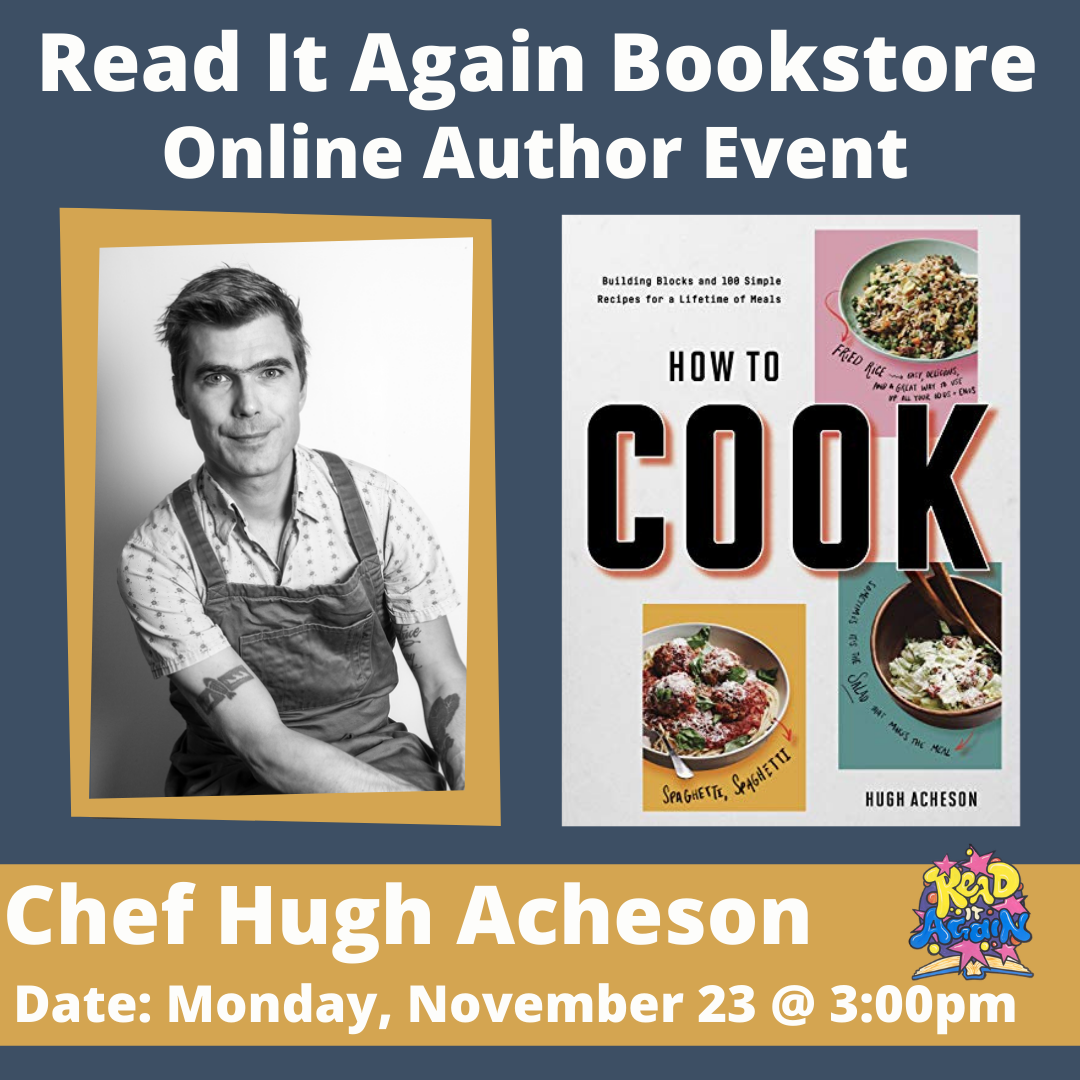 Read It Again Bookstore is so excited to welcome local celebrity chef, Hugh Acheson! His new book- How to Cook is the perfect gift for anyone setting out on their own for the first time. Please join us November 23 at 3pm for a live conversation with Chef Hugh Acheson. You can watch this event live on our YouTube Channel or Facebook page.

You can watch this event here- https://www.youtube.com/watch?v=5LR0oiZgrTA

Hugh Acheson is the chef/partner of the Georgia restaurants 5 & 10 and The National located in Athens, Empire State South in Atlanta, and The Florence in Savannah. Born and raised in Ottawa, Canada Hugh started cooking at a young age and decided to make it his career after taking a very long time to realize that academics weren't his thing. At age 15, he began working in restaurants after school and learning as much as possible.

Today, Acheson's experience includes working under Chef Rob MacDonald where he learned stylized French cuisine, wine, and etiquette at the renowned Henri Burger restaurant in Ottawa, and in San Francisco as the chef de cuisine with Chef Mike Fennelly at Mecca, and later as opening sous chef with famed Chef Gary Danko at Chef Danko's namesake restaurant, where he found a love of the simple, pure and disciplined, which guided him when opening his own restaurants in the years to follow.

Hugh's cookbook titled A New Turn in the South: Southern Flavors Reinvented for Your Kitchen published by Clarkson Potter, hit the bookshelves on October 18th, 2011 and won the award for Best Cookbook in the field of "American Cooking" by the James Beard Foundation in 2012. With inviting and surprising photography full of Hugh's personality, and pages layered with his own quirky writing and sketches, Hugh invites you into his community and his very creative world of food, and to add new favorites to your repertoire.

His second book, Pick a Pickle: 50 recipes for Pickles, Relishes, and Fermented Snacks, is a pickling swatchbook and handy kitchen reference guide.

Hugh's third book, The Broad Fork: Recipes for the Wide World of Vegetables and Fruits published by Clarkson Potter, is due out in May of 2015. It's a vegetable-centric look at cooking through the seasons.

Acheson's fresh approach to Southern food has earned him a great deal of recognition including Food & Wine's Best New Chef in 2002 and winner for Best Chef Southeast by the James Beard Foundation in 2012. In 2010 Hugh competed on Bravo's Top Chef Masters: Season 3. He currently serves as a judge on Top Chef.

How to Cook: Building Blocks and 100 Simple Recipes for a Lifetime of Meals: A Cookbook

An empowering collection of 100 delicious, practical recipes that will teach young adults and kitchen novices how to cook for themselves—from a James Beard Award–winning chef and author.
Acclaimed chef, TV star, and dedicated father Hugh Acheson taught his teenage daughters that cooking is an essential life skill. But he also knew that people don’t need to know how to cook like a chef to feed themselves and their friends. Really, they only need to learn a handful of skills to enjoy a lifetime of cooking.
So, in How to Cook, Hugh distills the cooking lessons that everyone should master into twenty-five basic building blocks: easy-to-grasp recipes that can turn anyone, young or old, into a confident home cook. Each of these recipes teaches a fundamental skill, such as roasting or whisking together a classic vinaigrette, and each stands alone as a stellar back-pocket basic. After laying the groundwork, How to Cook then offers recipes that expand on these foundations, whether it’s remixing the flavors of one of the basic recipes, or combining a couple of them, to show you how you can produce a lifetime’s worth of dishes.

How to Cook is the book Hugh is going to give his kids when they leave home, knowing that with these 100 recipes, they’ll be prepared to feed themselves for the rest of their lives. 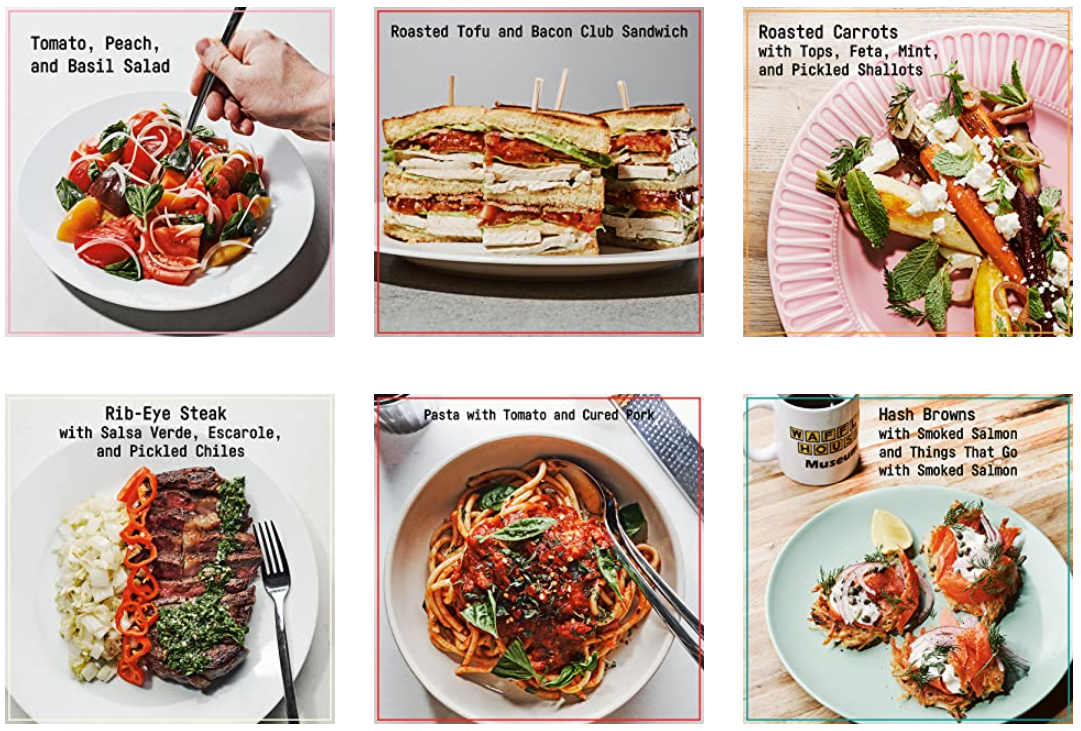 How to Cook: Building Blocks and 100 Simple Recipes for a Lifetime of Meals: A Cookbook (Paperback)

The Chef and the Slow Cooker: A Cookbook (Hardcover)

The Broad Fork: Recipes for the Wide World of Vegetables and Fruits: A Cookbook (Hardcover)