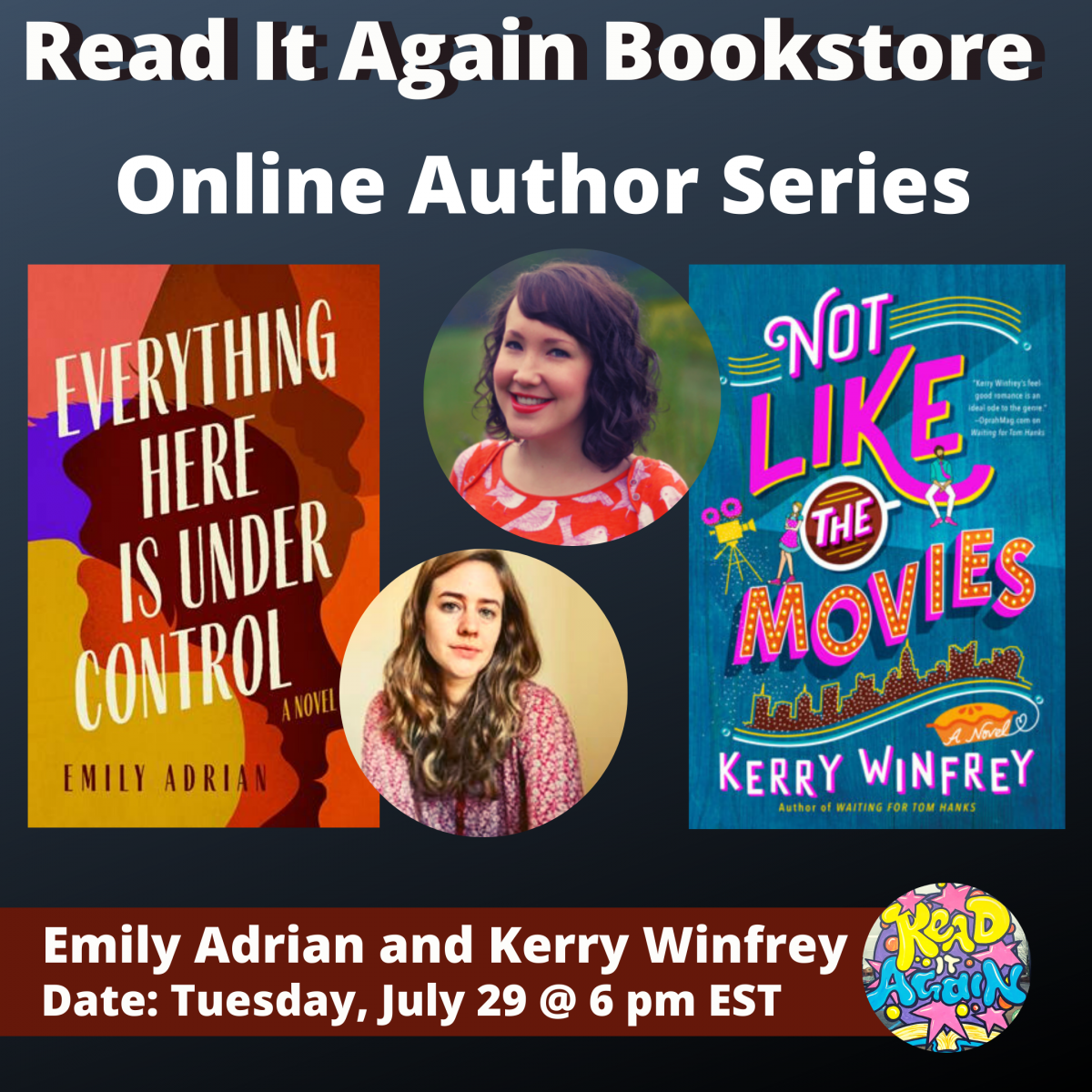 Read It Again Bookstore is extremely excited to welcome Emily Adrian and Kerry Winfrey to our Online Author Series!! This will be an online event hosted on both Facebook Live and Youtube Live. We promise, this book talk is going to be so much fun! Emily and Kerry are old friends, so we expect an energetic conversation about their books, common interests, writing, family and life in general! You too can join the conversation. Make a comment during our live discussion and we'll post it to the video! So please join us, July 29th at 6pm.

You can watch the event here-

Emily Adrian is the author of two critically acclaimed young adult novels, Like It Never Happened and The Foreseeable Future. Everything Here is under Control is her first adult novel. She lives in New Haven, CT, with her husband, her son, and their dog, Hank.

"Emily Adrian is such a uniquely perceptive writer, possessing a kind of X-ray vision that finds the hidden truths inside of us, no matter how painful they might be. Everything Here Is under Control skillfully lays out a story that converges on motherhood, friendship, and our responsibilities to the world around us, the lives that touch us. A beautiful, bracing novel by an amazing, open-hearted writer."

"How Emily Adrian could write a book so honest and raw about the first weeks of motherhood and yet so appealing and unputdownable and-dare I say, heartwarming-is a mystery of novelistic alchemy. Nonetheless, there it levitates: light as a feather and heavy as a stone, a romantic comedy that redefines the terms of traditional romance and takes happily ever after far beyond the loss of maidenhood. Magic, addictive, brilliant fun."

Everything Here Is Under Control-

Amanda is a new mother, and she is breaking. After a fight with her partner, she puts the baby in the car and drives from Queens to her hometown in rural Ohio, where she shows up unannounced on the doorstep of her estranged childhood best friend. Amanda thought that she had left Carrie firmly in the past. After their friendship ended, their lives diverged radically: Carrie had a baby the summer after high school, became a successful tattoo artist, and never escaped Ohio's conservative grid of close-cut grass. But the trauma of childbirth and shock of motherhood compel Amanda to go back to the beginning and to trace the tangled roots of friendship and family in her own life.

Compelling and engaging, Everything Here Is under Control is a raw, honest, occasionally hilarious portrait of the complexity, conflicting emotions, and physical trauma of both modern motherhood and the intense, intimate friendships that women forge in their youth.

Kerry Winfrey grew up in Bellville, Ohio, where she spent most of her time reading inappropriate books at the library. Not much has changed. Kerry writes for HelloGiggles and blogs at welcometoladyville.com. She lives in Columbus, Ohio with her husband, their son, and their dog, Merlin. You can find her on Twitter @KerryAnn.

What happens when your life is a rom-com . . . but you don’t even believe in true love?

Chloe Sanderson is an optimist, and not because her life is easy. As the sole caregiver for her father, who has early-onset Alzheimer’s, she’s pretty much responsible for everything. She has no time—or interest—in getting swept up in some dazzling romance. Not like her best friend, Annie, who literally wrote a rom-com that’s about to premiere in theaters across America . . . and happens to be inspired by Chloe and her cute but no-nonsense boss, Nick Velez.

As the buzz for the movie grows, Chloe reads one too many listicles about why Nick is the perfect man, and now she can’t see him as anything but Reason #4: The scruffy-bearded hunk who’s always there when you need him. But unlike the romance Annie has written for them, Chloe isn’t so sure her own story will end in a happily-ever-after.

“Winfrey excels at upending typical romantic comedy tropes, and Chloe is a complicated, realistic, believable character. Sitcoms, movies, and music are all heavily referenced in the story; fans of the TV series New Girl will no doubt love this book. A quirky novel perfect for rom-com fans and readers looking for a little sweet escapism.”—Kirkus Reviews

Everything Here Is Under Control (Hardcover)

Things Jolie Needs to Do Before She Bites It (Paperback)

Love and Other Alien Experiences (Paperback)