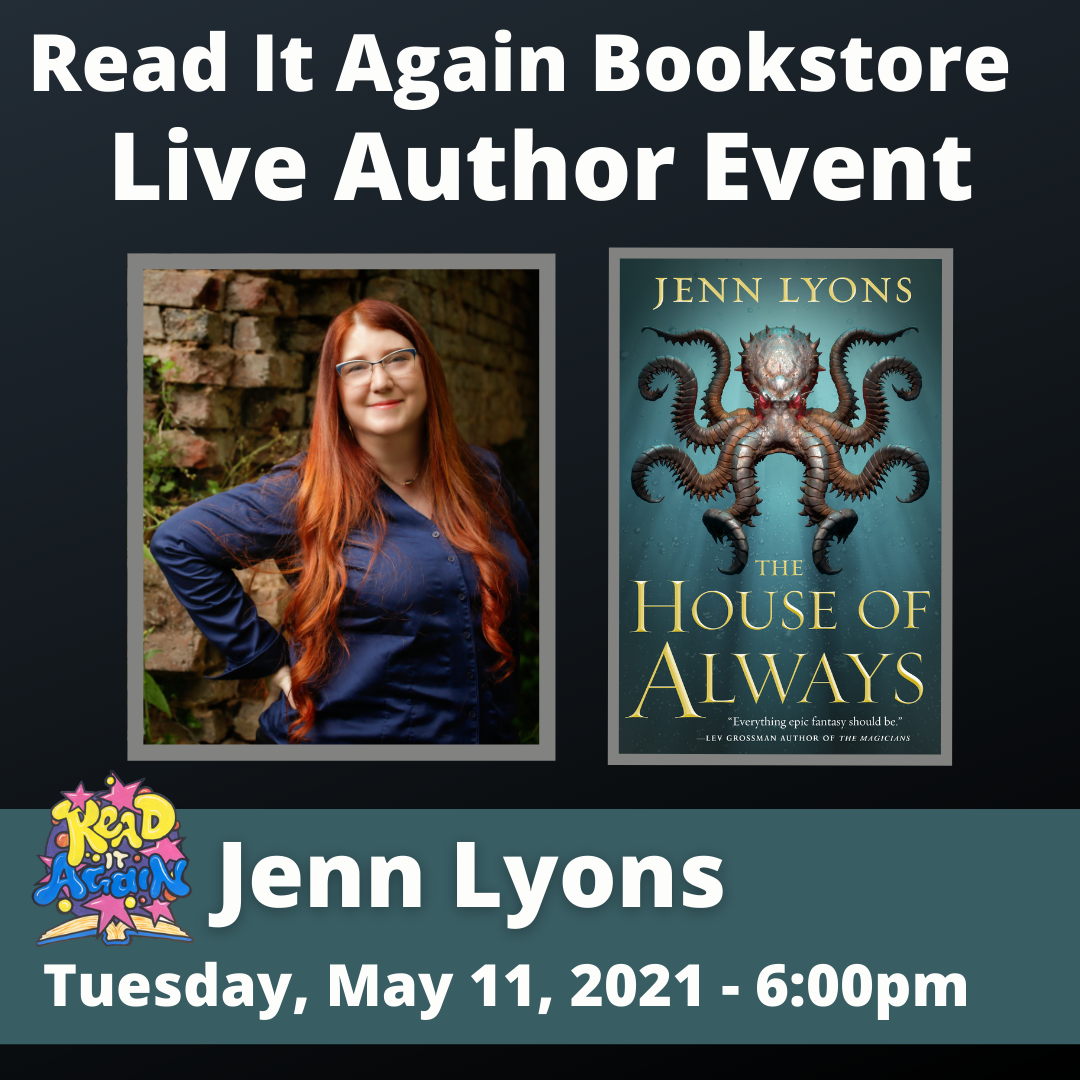 Read It Again Bookstore is so excited to welcome back one of our favorite authors, Jenn Lyons! Join us May 11th at 6pm when we discuss Jenn's fourth book,  The House of Always.

You can join the conversation here: https://www.youtube.com/watch?v=YTFajkmcj2E

With her debut The Ruin of Kings (now available in trade paperback), Jenn Lyons burst onto the scene, bringing new game to the world of epic fantasy, receiving starred and glowing reviews from critics, readers, and booksellers alike.  Indeed, Lyons’ storytelling prowess gained her many fans, including Annapurna Television, who recently optioned The Ruin of Kings for development for a tv series.

Now, those looking to take another voyage into what NPR Books called, “One of the most immersive new fantasy series,” will be thrilled with THE HOUSE OF ALWAYS (Tor Hardcover; On-sale: May 11, 2021), the newest in the A Chorus of Dragons saga. With this latest gripping adventure, Jenn Lyons returns to the meticulously detailed world she has created and continues to deliver an expansive, thrilling journey in captivating fashion.

Jenn Lyons was a graphic artist and illustrator for 20 years and has worked in video games for over a decade. She previously worked on The Saboteur and Lord of the Rings: Conquest at EA Games. She is based out of Atlanta, Georgia. Visit her at jennlyons.com or follow her on Twitter: @jennlyonsauthor.

The House of Always (A Chorus of Dragons #4)-

For fans of Brandon Sanderson and Patrick Rothfuss, The House of Always is the fourth epic fantasy in Jenn Lyons' Chorus of Dragons series that began with The Ruin of Kings.

What if you were imprisoned for all eternity?

In the aftermath of the Ritual of Night, everything has changed.

The Eight Immortals have catastrophically failed to stop Kihrin's enemies, who are moving forward with their plans to free Vol Karoth, the King of Demons. Kihrin has his own ideas about how to fight back, but even if he's willing to sacrifice everything for victory, the cost may prove too high for his allies.

Now they face a choice: can they save the world while saving Kihrin, too? Or will they be forced to watch as he becomes the very evil they have all sworn to destroy?

The House of Always (A Chorus of Dragons #4) (Hardcover)

The Memory of Souls (A Chorus of Dragons #3) (Paperback)