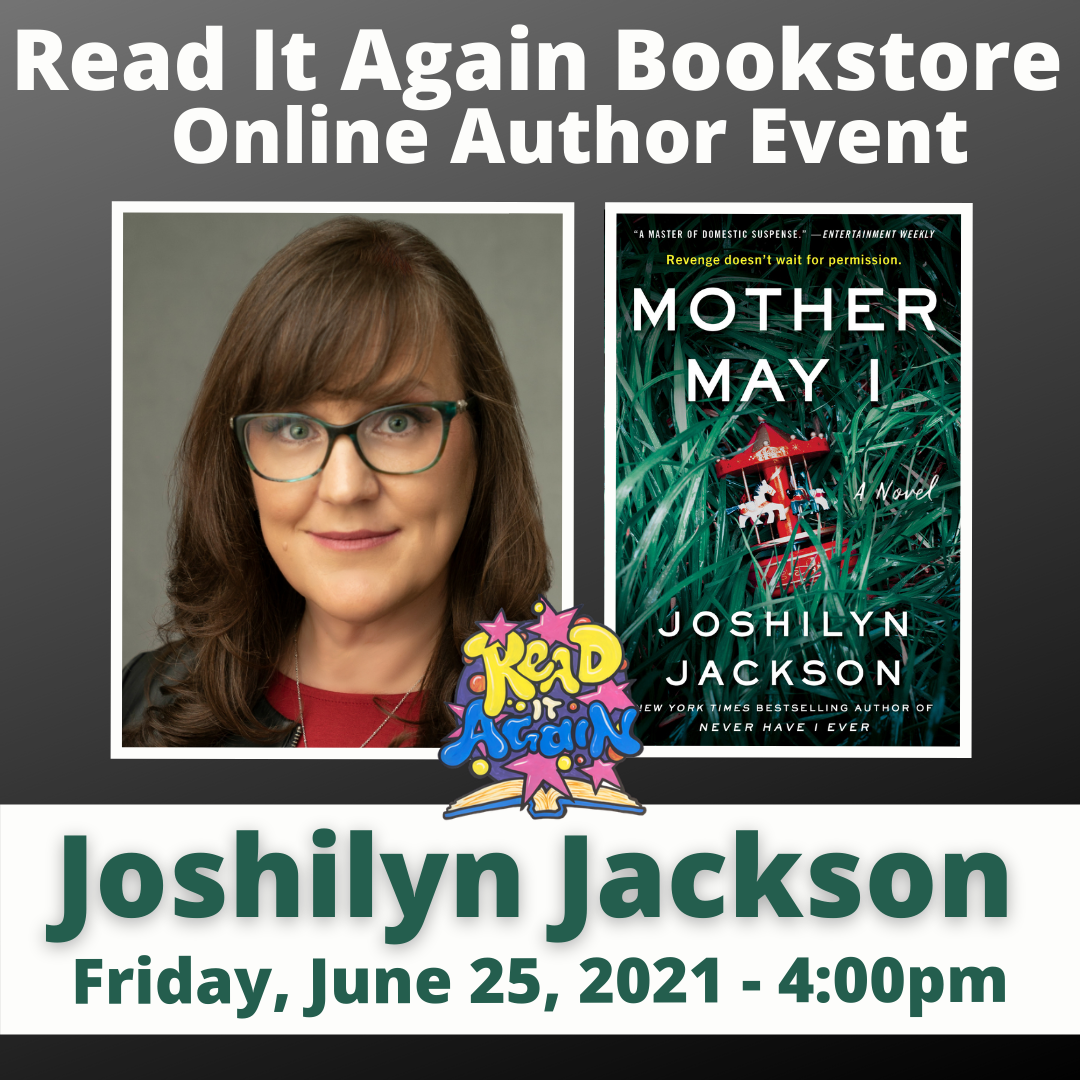 Read It Again Bookstore is so EXCITED to welcome back one of our favorite authors, Joshilyn Jackson. Join us Friday, June 25th at 4pm for our discussion of Mother May I. If you haven't read Mother May I yet, pick up your copy today. This is a staff favorite, you don't want to miss out.

You can join this event here: https://www.youtube.com/watch?v=qb01eWqYsIw

Joshilyn Jackson is the New York Times and USA Today Bestselling author of nine novels, including gods in Alabama, The Almost Sisters, and Never Have I Ever (July, 2019)

She lives in Decatur, Georgia with her husband and their two kids. She serves on the board of and volunteers with Reforming Arts, teaching creative writing inside Lee Arrendale State Prison, Georgia's maximum security facility for women. Through their education-in-prison and reentry programs, Reforming Arts fosters the development of critical and creative thinking skills, encouraging students to build livable lives.

She's also an award winning audiobook narrator, performing most of her own work as well as novels by Lydia Netzer and Marybeth Mayhew Whalen

"Chilling, thought-provoking, and hauntingly written, Mother May I kept me on the edge of my seat with its breathless race against time." (Megan Miranda, New York Times best-selling author of The Girl from Widow Hills)

The New York Times best-selling author of the critically acclaimed Never Have I Ever builds on her success with this addictive novel of domestic suspense in which a mother must decide how far she is willing to go to protect her child and the life she loves - a chilling and thoughtful tale of power, privilege, lies, revenge, and the choices we make, ones that transform our lives in unforeseen ways.

Growing up poor in rural Georgia, Bree Cabbat was warned by her single mother that the world was a dark and scary place. Bree rejected her mother’s fearful outlook, and life has proved her right. Having married into a family with wealth, power, and connections, Bree has all a woman could ever dream of: a loving lawyer husband, two talented young teenage daughters, a new baby boy, a gorgeous home, and every opportunity in the world.

Until the day she awakens and sees a witch peering into her bedroom window, an old gray-haired woman dressed all in black who vanishes as quickly as she appears. It must be a play of the early morning light or the remnant of a waking dream, Bree tells herself, shaking off the bad feeling that overcomes her.

Later that day though, she spies the old woman again, in the parking lot of her daughters’ private school...just minutes before Bree’s infant son, asleep in his car seat only a few feet away, vanishes. It happened so quickly - Bree only looked away only for a second. There is a note left in his place, warning her that she is being is being watched; if she wants her baby back, she must not call the police or deviate in any way from the instructions that will follow.

The mysterious woman makes contact, and Bree learns she, too, is a mother. Why would another mother do this? What does she want? And why has she targeted Bree? Of course Bree will pay anything, do anything. It’s her child.

To get her baby back, Bree must complete one small - but critical - task. It seems harmless enough, but her action comes with a devastating price, making her complicit in a tangled web of tragedy and shocking secrets that could destroy everything she loves. It is the beginning of an odyssey that will lead Bree to dangerous places, explosive confrontations, and chilling truths.

Bree will do whatever it takes to protect her family - but what if the cost tears their world apart?

“Joshilyn Jackson does it again with this explosive, white-knuckle read about a mother who will stop at nothing to protect her family. Terrifying, timely and thought-provoking.” (Mary Kubica, New York Times best-selling author of The Other Mrs.)

Mother May I: A Novel (Hardcover)

Never Have I Ever: A Novel (Paperback)