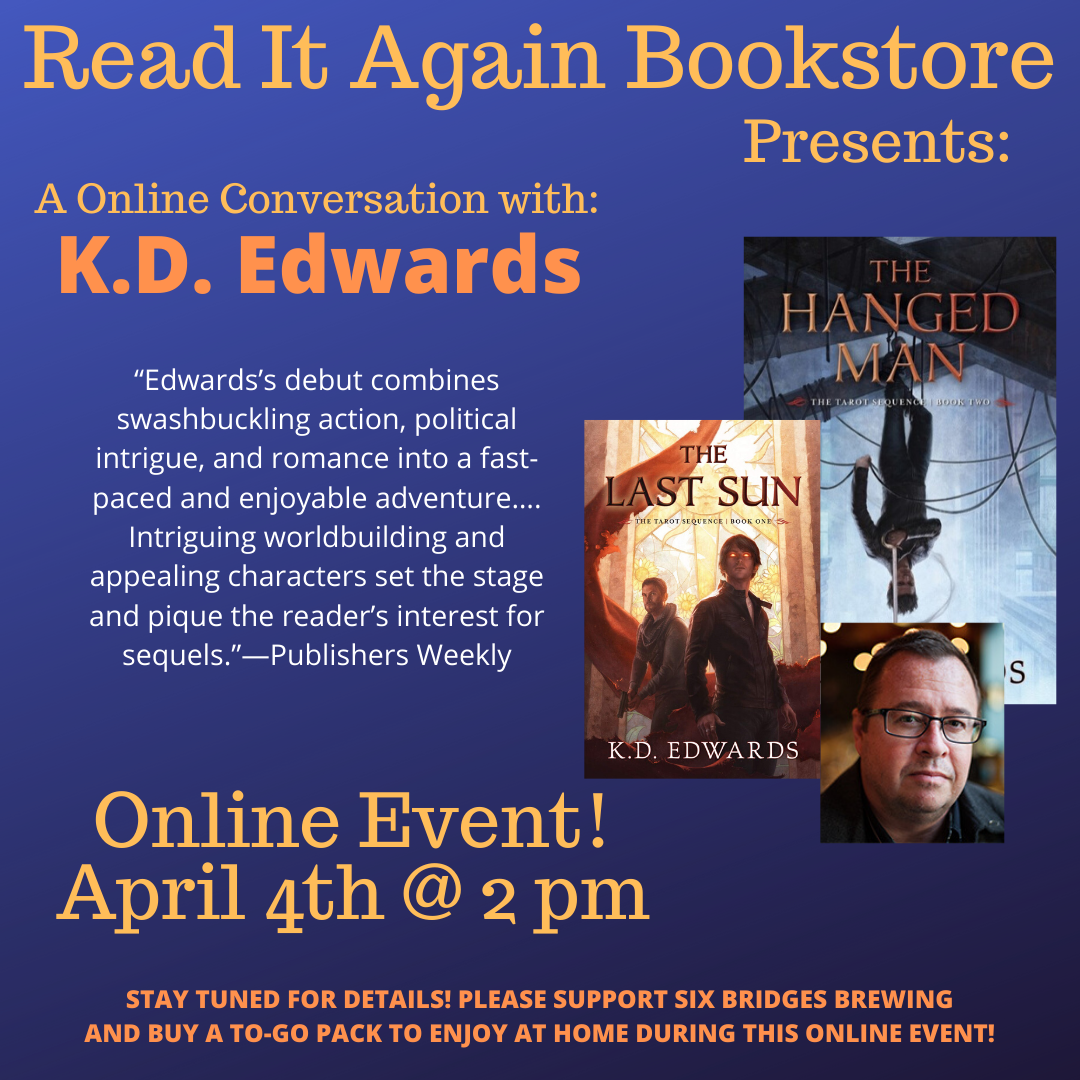 *In light of current events, we have decided to host this event online. Details to follow soon. Please remember to support Six Bridges. They are selling their to-go sales of both six packs and crowlers. *

Read It Again Bookstore is excited to announce a new partnership with Six Bridges Brewing. Our first joint venture will be A Conversation with K.D. Edwards. Join us April 4th at 2 pm, at Six Bridges Brewing. Pull up a chair, enjoy a locally brewed pint and listen to Mr. Edwards tell you about his exciting series, The Tarot Sequence.

In this debut novel and series starter, the last member of a murdered House searches for a missing nobleman, and uncovers clues about his own tortured past. Rune Saint John, last child of the fallen Sun Court, is hired to search for Lady Judgment's missing son, Addam, on New Atlantis, the island city where the Atlanteans moved after ordinary humans destroyed their original home. With his companion and bodyguard, Brand, he questions Addam's relatives and business contacts through the highest ranks of the nobles of New Atlantis. But as they investigate, they uncover more than a missing man: a legendary creature connected to the secret of the massacre of Rune's Court. In looking for Addam, can Rune find the truth behind his family's death and the torments of his past?

The last member of a murdered House tries to protect his ward from forced marriage to a monster while uncovering clues to his own tortured past.
The Tarot Sequence imagines a modern-day Atlantis off the coast of Massachusetts, governed by powerful Courts based on the traditional Tarot deck.
Rune Saint John, last child of the fallen Sun Throne, is backed into a fight of high court magic and political appetites in a desperate bid to protect his ward, Max, from a forced marital alliance with the Hanged Man.
Rune's resistance will take him to the island's dankest corners, including a red light district made of moored ghost ships; the residence of Lady Death; and the floor of the ruling Convocation, where a gathering of Arcana will change Rune's life forever.

K.D. Edwards lives and writes in North Carolina, but has spent time in Massachusetts, Maine, Colorado, New Hampshire, Montana, and Washington State. (Common theme until NC: Snow. So, so much snow.) Mercifully short careers in food service, interactive television, corporate banking, retail management, and bariatric furniture have led to a much less short career in higher education, currently for the University of North Carolina System. THE LAST SUN and THE HANGED MAN are the first two books in his TAROT SEQUENCE series, inspired by thoughts of a modern-day Atlantis.

“Edwards’s debut combines swashbuckling action, political intrigue, and romance into a fast-paced and enjoyable adventure…. Intriguing worldbuilding and appealing characters set the stage and pique the reader’s interest for sequels.”

“Jaw-dropping worldbuilding, fluent prose, and an equal blend of noir and snark make for that most delicious of fantasy adventures, an out-of-this-world tale that feels pressingly real. A smart and savvy joy.”

—A. J. Hartley, New York Times–bestselling author of the Steeplejack series and the Cathedrals of Glass series

“Edwards's gorgeous debut presents an alternate modern world that is at once unusual and familiar, with a grand interplay of powers formed by family and the supernatural. Intriguing characters, a fast-paced mystery, and an original magical hierarchy will immediately hook readers, who will eagerly await the next volume in this urban fantasy series.”
—Library Journal STARRED review

“Absolutely sensational. Edwards takes all the familiar pawns of urban fantasy and makes royalty of them in his debut. We’re invited into an alternative, historical world of staggering breadth and realization. The central characters, Rune and Brand, combine the loyalty of Frodo and Samwise with the sacrilege of a pairing like Tyrion and Bronn. When thrown in beside fascinating magical systems, breathtaking prose, and a relentless plot—this is the tale of Atlantean magic we didn’t know we wanted.”

“This is a highly enjoyable read: take the witty noir of Dashiell Hammett’s The Thin Man, kick it to an alternate present day, add equal portions of action and magic, garnish with a sprig of romance, and you have The Last Sun. A great recipe.”

“Sharp dialogue, plus characters you want to follow around just to see what happens next . . . What’s not to love?”