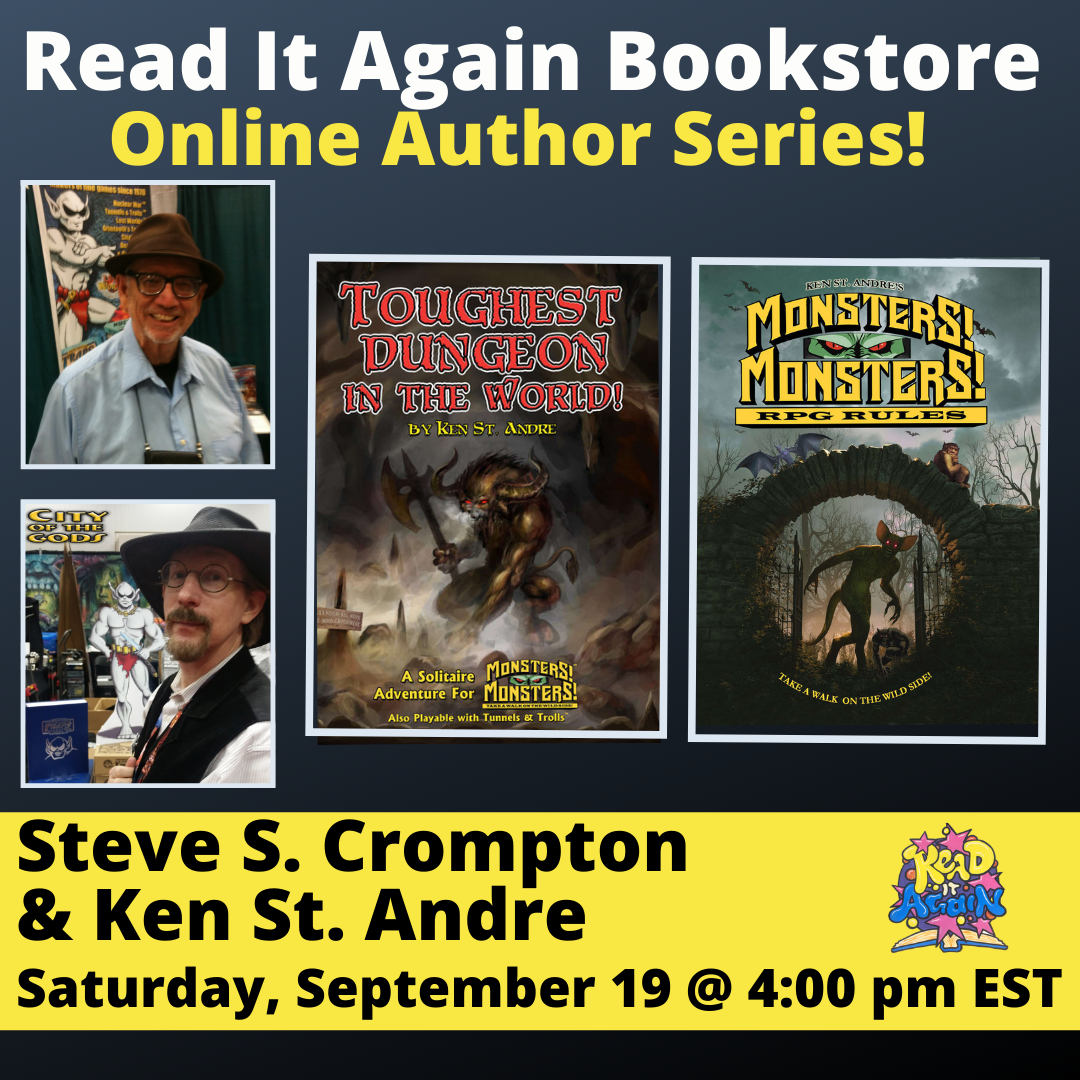 Read It Again Bookstore is excited to welcome Steve S. Crompton and Ken St. Andre contributors to the RPG classic, Tunnels & Trolls. Join us September 19th at 4 pm EST, for a discussion about the newest editions of T&T- Monsters! Monsters! and Toughest Dungeon in the World. You can join the conversation! Ask questions in the comments and we can post them to the video.

Steven S. Crompton is a Canadian-born artist, author and designer who has worked in the role-playing and comic genres since 1981. In the gaming industry he is best known as the artist for the Grimtooth Traps books as well as other Catalyst role-playing game supplements, Tunnels & Trolls and the Nuclear War card game.

Ken St. Andre is a retired public librarian, fantasy author, and game designer, best known for his creation, Tunnels & Trolls. Ken has been an active member of The Science Fiction and Fantasy Writers of America since 1989. In June 2018, Ken St. Andre was inducted into the Origins Hall of Fame. Ken is one of the last standing creators of the first generation of role-playing game designers and is still working on the classic games he created.

Now it’s 2020 –  Ken has updated and enhanced his classic solo adventure and the Monsters! Monsters! rules. The new M! M! rules lists 38 monster kindreds you can play, gives you their dice modifiers and now each monster has a special power unique to its kindred. Each monster is described in a separate section. It's also better organized and easier to use. (For example – now the monsters are separated into humanoid and non-humanoid types). There are two character sheets you can use along with specialized charts that allow you to roll up various types of Monsters based on many common FRPG environments.

This new edition of the Toughest Dungeon Solo is at least 44 pages long and will keep any player busy with adventures in caverns and tunnels deep below Trollworld. The Lord of Shadows dwells in the depths – can you avoid his power or will you be corrupted by it? You can also play this solo adventure with the Tunnels & Trolls rules or the Monsters! Monsters! rules, so you don’t have to learn a whole new RPG to play.

Steve Crompton, who has worked as Flying Buffalo’s art director since the 1990’s, has enhanced the new editions with new illustrations and graphics more suitable for a monster-mash solo adventure.

Don’t miss out on being a part of a piece of gaming history – the return of Monsters! Monsters! and a chance to explore, The Toughest Dungeon in the World! (No matter which edition you get!)

Now OPEN Next to Michaels