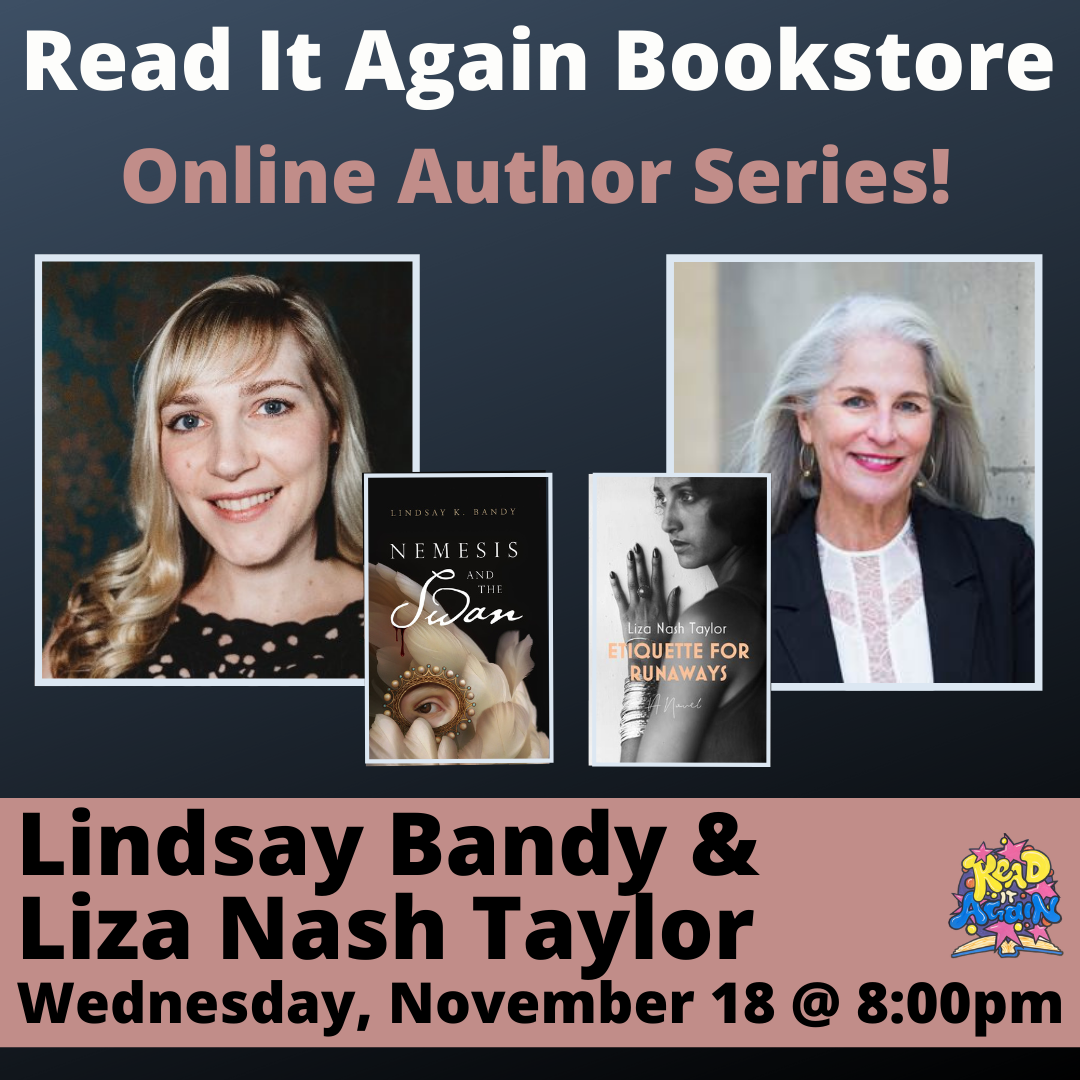 Read It Again Bookstore is very excited to welcome back Liza Nash Taylor to our online author series! Join us November 18th at 8pm for a discussion between Liza and Lindsay Bandy! Lindsay's new teen book, Nemesis and the Swan was just released and we can't wait to read it. This will be a fun conversation about Paris, writing and historical fiction!

You can watch this event here- https://www.youtube.com/watch?v=VLb_4LlZqW0

Nemesis and the Swan

From her prison cell in revolutionary Paris, nineteen-year-old aristocrat Hélène d’Aubign recalls the events that led her to choose between following in her parents’ unforgivable footsteps or abandoning the man she loves.

Despite her world of privilege, Hélène is inspired early on by the radical ideas of her progressive governess. Though her family tries to intervene, the seeds of revolution have already been planted in Hélène’s heart, as are the seeds of love from an unlikely friendship with a young jeweler’s apprentice. Hélène’s determination to find true love is as revolutionary as her attempt to unravel the truth behind a concealed murder that tore her family apart.

As violence erupts in Paris, Hélène is forced into hiding with her estranged family, where the tangled secrets of their past become entwined with her own. When she finally returns to the blood-stained streets of Paris, she finds everything—and everyone—very much changed. In a city where alliances shift overnight, no one knows whom to trust.

Faced with looming war, the mystery of her family’s past, and the man she loves near death, Hélène will soon will find out if doing one wrong thing will make everything right, or if it will simply push her closer to the guillotine.

Lindsay Bandy writes historical and contemporary young adult fiction as well as poetry. She lives in Lancaster, Pennsylvania, with her husband, two daughters, and two cats, and currently serves as the co–regional advisor of the Eastern Pennsylvania region of Society of Children’s Book Writers and Illustrators.

A sweeping Jazz Age tale of regret, ambition, and redemption inspired by true events, including the Great Moonshine Conspiracy Trial of 1935 and Josephine Baker’s 1925 Paris debut in Le Revue Nègre

1924. May Marshall is determined to spend the dog days of summer in self-imposed exile at her father’s farm in Keswick, Virginia. Following a naive dalliance that led to heartbreak and her expulsion from Mary Baldwin College, May returns home with a shameful secret only to find her father’s orchard is now the site of a lucrative moonshining enterprise. Despite warnings from the one man she trusts—her childhood friend Byrd—she joins her father’s illegal business. When authorities close in and her father, Henry, is arrested, May goes on the run.

May arrives in New York City, determined to reinvent herself as May Valentine and succeed on her own terms, following her mother’s footsteps as a costume designer. The Jazz Age city glitters with both opportunity and the darker temptations of cocaine and nightlife. From a start mending sheets at the famed Biltmore Hotel, May falls into a position designing costumes for a newly formed troupe of African American entertainers bound for Paris. Reveling in her good fortune, May will do anything for the chance to go abroad, and the lines between right and wrong begin to blur. When Byrd shows up in New York, intent upon taking May back home, she pushes him, and her past, away.

In Paris, May’s run of luck comes to a screeching halt, spiraling her into darkness as she unravels a painful secret about her past. May must make a choice: surrender to failure and addiction, or face the truth and make amends to those she has wronged. But first, she must find self-forgiveness before she can try to reclaim what her heart craves most.

Liza Nash Taylor was a 2018 Hawthornden International Fellow and received her MFA from Vermont College of Fine Arts. The 2016 winner of the San Miguel Writer’s Conference Fiction Prize, her work has appeared in Microchondria II, Gargoyle Magazine, and Deep South, amongst others. A native Virginian, she lives in Keswick with her husband and dogs.

Nemesis and the Swan (Hardcover)