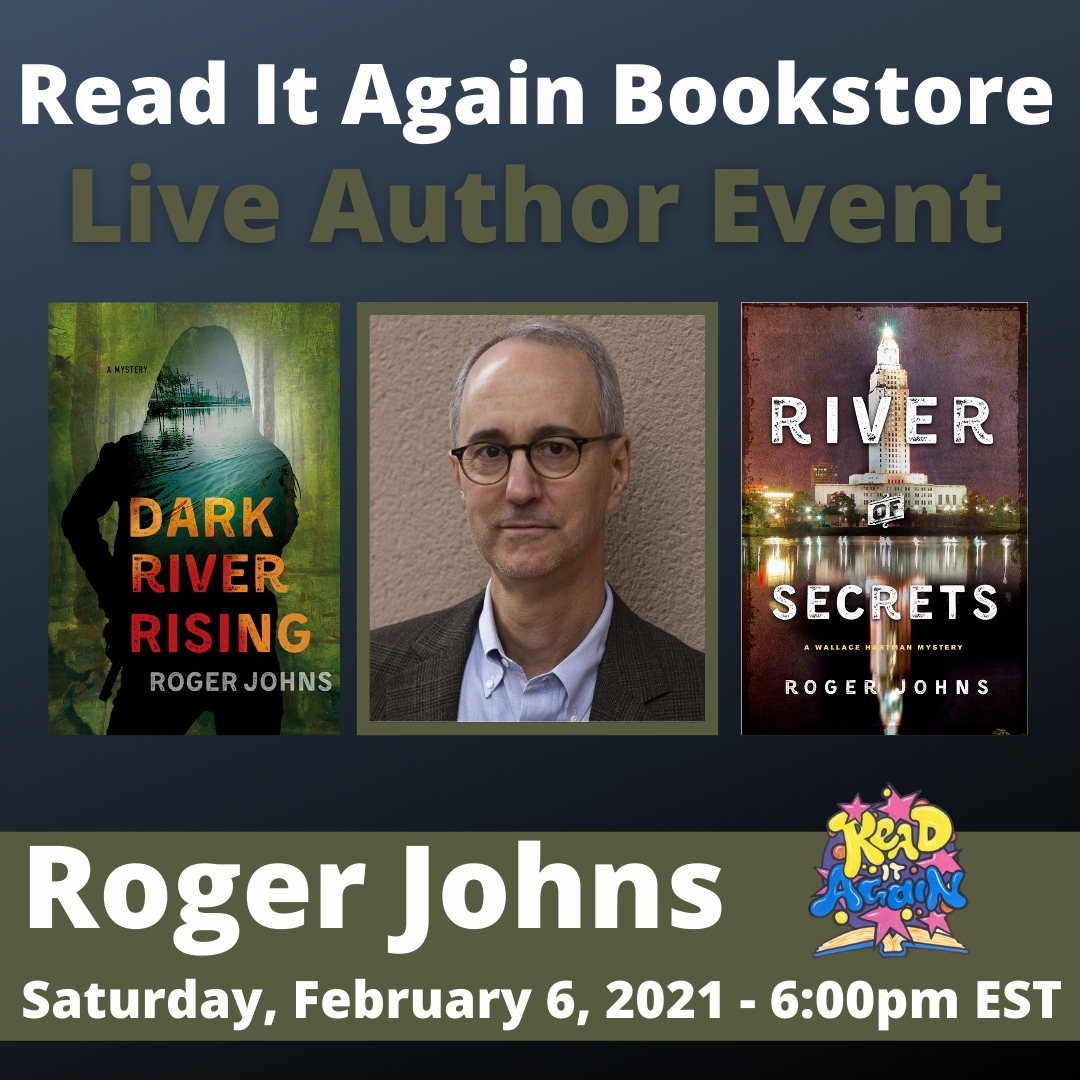 Read It Again Bookstore is excited to welcome back Roger Johns to our online author event. Join us February 6th at 6pm when we talk about his books- Dark River Rising, and River of Secrets. You can join this event on our YouTube channel.

“A finely crafted ensemble and a balanced grace makes this debut novel as hard to resist as blue ribbon gumbo.” —Craig Johnson, New York Times bestselling author of the Walt Longmire Mysteries, the basis for the Netflix hit drama Longmire

Dark River Rising is a tense and expertly-plotted mystery set against the bayous of Louisiana, from debut author Roger Johns.

Baton Rouge Police Detective Wallace Hartman has had better days. With her long-time partner and mentor on medical leave and a personal life in shambles, she’s called to the scene of a particularly gruesome murder: the body of a known criminal has been found in a deserted warehouse, a snake sewn into his belly. Obvious signs of torture point to a cunning and cold-blooded killer who will stop at nothing to find what he’s looking for.

When Federal Agent Mason Cunningham arrives on the scene, Wallace expects a hostile takeover of the case. But when a scientist with ties to the victim goes missing from a government lab, she needs Mason’s federal connections as much as he needs her local insight, and the two form an uneasy partnership to solve a case that grows more complicated—and dangerous—by the minute.

Meanwhile, the killer lurks in the shadows with an agenda no one saw coming, and when Wallace and Mason threaten to get in the way they risk losing everything they hold dear. Including their lives.

When a controversial politician is murdered in cold blood, Baton Rouge Police Detective Wallace Hartman struggles to find the killer amid conspiracies and corruption in River of Secrets, a gripping new mystery from Roger Johns.

Herbert Marioneaux, a Louisiana politician infamous for changing his mind on hot-button issues, has been murdered and his body posed to send a message. Baton Rouge homicide detective Wallace Hartman has to figure out who’s sending that message. DNA points to Eddie Pitkin, a social justice activist who also happens to be the half-brother of Wallace’s childhood best friend. But even with the combative history between Pitkin and Marioneaux, murder seems out of character for Pitkin, whose usual MO is to confront the wealthy and powerful with their inconvenient past. As Wallace digs deeper, she unearths a possible alibi witness, along with evidence of a deeply troubled relationship that points the finger of suspicion at Marioneaux’s son.

While Eddie’s supporters are convinced of his innocence, his enemies are equally certain of his guilt. Under pressure from all directions, Wallace pursues her investigation into the dark heart of the political establishment as Baton Rouge falls under the shadow of escalating violence. When it appears a police department insider may be sabotaging her efforts by leaking information about the case, and after menacing messages are left for her and her loved ones, Wallace is forced to untangle a trail of old and disturbing secrets unaided by those she most needs to trust.