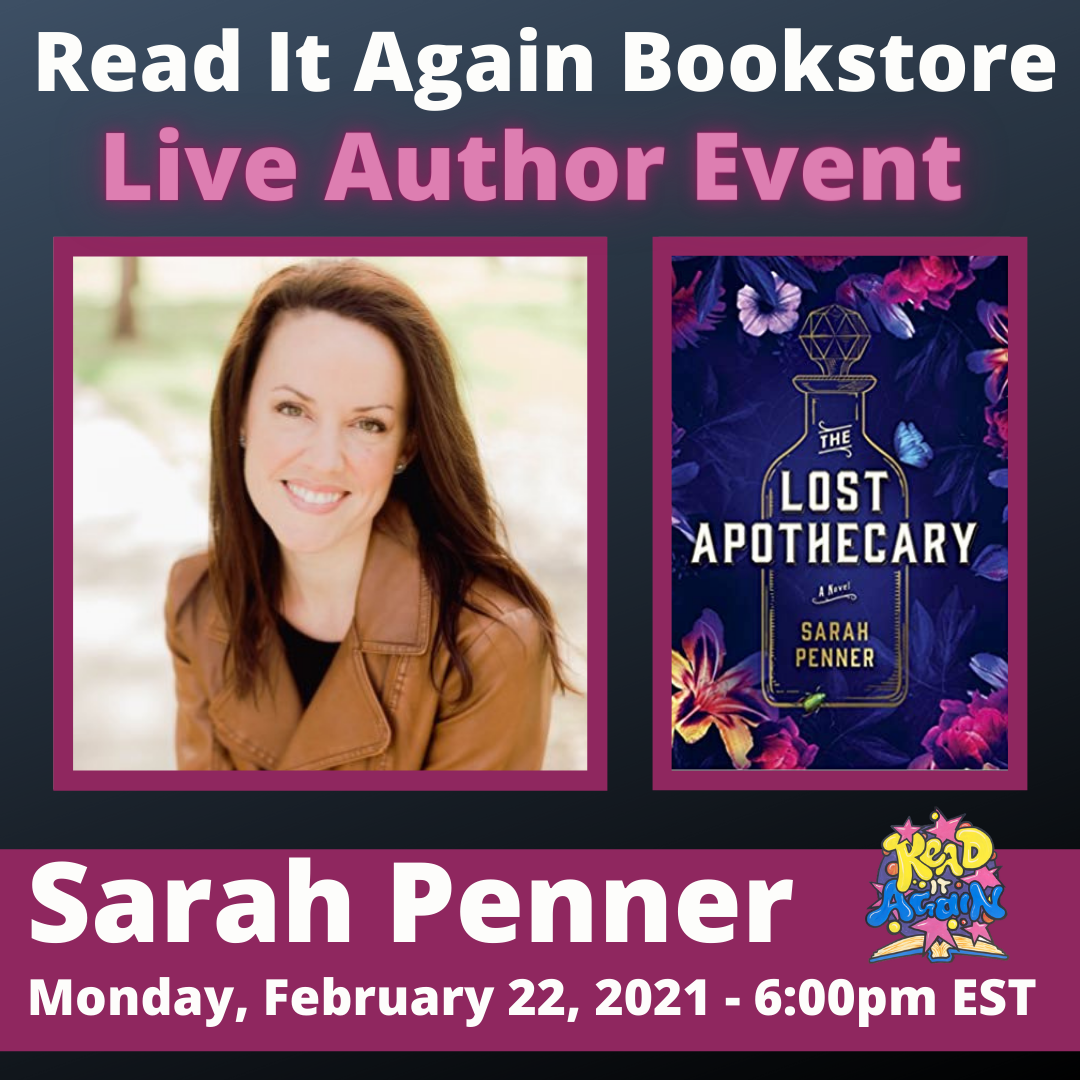 Read It Again Bookstore is very excited to Welcome Sarah Penner to our online author series. Join us February 22 at 6pm EST, when we discuss Sarah's new book, The Lost Apothecary.

A forgotten history. A secret network of women. A legacy of poison and revenge. Welcome to The Lost Apothecary…

Hidden in the depths of eighteenth-century London, a secret apothecary shop caters to an unusual kind of clientele. Women across the city whisper of a mysterious figure named Nella who sells well-disguised poisons to use against the oppressive men in their lives. But the apothecary’s fate is jeopardized when her newest patron, a precocious twelve-year-old, makes a fatal mistake, sparking a string of consequences that echo through the centuries.

Meanwhile in present-day London, aspiring historian Caroline Parcewell spends her tenth wedding anniversary alone, running from her own demons. When she stumbles upon a clue to the unsolved apothecary murders that haunted London two hundred years ago, her life collides with the apothecary’s in a stunning twist of fate—and not everyone will survive.

With crackling suspense, unforgettable characters and searing insight, The Lost Apothecary is a subversive and intoxicating debut novel of secrets, vengeance and the remarkable ways women can save each other despite the barrier of time.

Sarah Penner is the debut author of The Lost Apothecary, to be translated in eleven languages worldwide. She works full-time in finance and is a member of the Historical Novel Society and the Women's Fiction Writers Association. She and her husband live in St. Petersburg, Florida, with their miniature dachshund, Zoe. To learn more, visit slpenner.com.

"In The Lost Apothecary, Sarah Penner convincingly weaves three heroines and two timelines into one tale of poison, revenge, and the silent network of women helping other women in a world stacked against them.... A bold, edgy, accomplished debut!" --Kate Quinn, New York Times bestselling author of The Alice Network and The Huntress

"Dark, clever, and wickedly fun, The Lost Apothecary is a true page-turner. Sarah Penner has given us a puzzle box of women's lives, betrayal, power, and history. It's a book that slyly asks what any of us deserve and if, sometimes, that might not be a little poison." --Erika Swyler, bestselling author of The Book of Speculation

"Filled with fascinating historical detail... With gathering intensity, author Sarah Penner builds toward a heart-pounding, satisfying conclusion. A skilled, captivating debut that celebrates the strength of women across the centuries." --Kristin Harmel, New York Times bestselling author of The Book of Lost Names

"Penner's debut had me completely under its spell. The women of The Lost Apothecary, separated by centuries, seek both revenge and truth in this powerful story. Riveting and utterly original." --Fiona Davis, bestselling author of The Dollhouse

"Sarah Penner kept me guessing until the last page of this addictive, atmospheric novel... Meticulously researched, The Lost Apothecary is both a cure for idleness and a recipe for intrigue. Prepare to be consumed by this carefully plotted, propulsive debut." --Amy Meyerson, bestselling author of The Bookshop of Yesterdays

"An intoxicating debut, The Lost Apothecary is a riveting tale of poisons and potions and dark deeds in the name of survival." --Heather Webb, bestselling co-author of Meet Me in Monaco