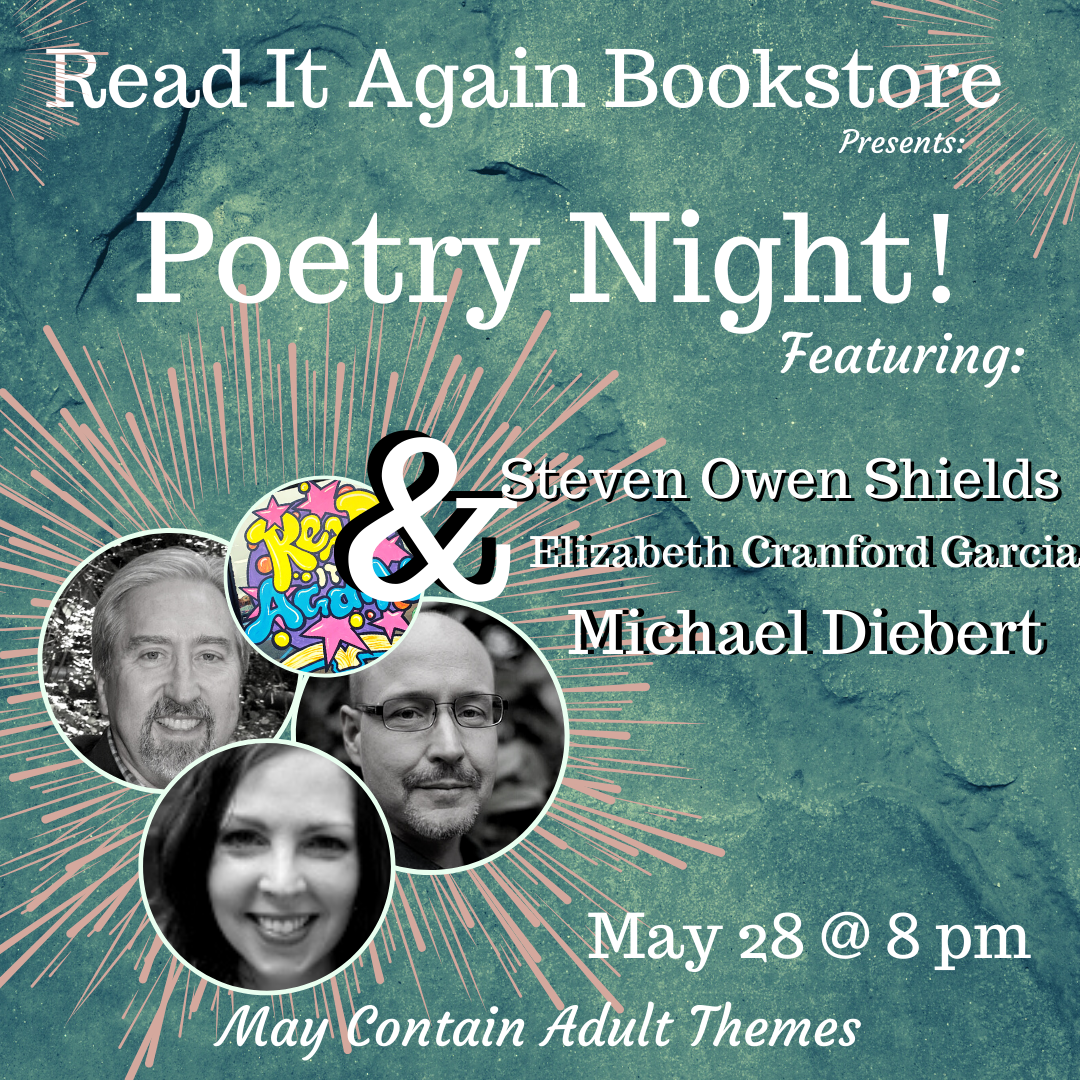 Read It Again Bookstore is excited to welcome Steven Owen Shields, Elizabeth Cranford Garcia, and Michael Diebert to our new weekly poetry series. Steven, Liz, and Michael are all local poets and friends. This should be a fun and lively conversation about poetry and craft.

Steven Owen Shields is a former all-night disc jockey and present-day college professor of mass communication at the University of North Georgia.  Originally from Indiana, Steven grew up reading his father’s collection of 1950s science fiction and arguing theology with his grandfather, a credentialed Methodist minister.  After earning his MA in Journalism from Ball State and his Ph.D. in Mass Communication from the University of Wisconsin, Steven spent several years teaching coursework in broadcasting and media for the University of Wisconsin-Whitewater.  Although his first published work appeared in his high school literary magazine, it was not until a move to Georgia in the late Nineties that his interest in poetry returned.  Creation Story is his second full collection.  His first, Daimonion Sonata, was published letterpress by Birch Brook Press (2005).  His work also has appeared in publications such as Angle, Deronda Review, Lyric, Measure, Main Street Rag, Midwestern Gothic, Raintown Review, The Reach of Song, Sleet, and Umbrella, among many others.  He also has edited a collection of his great-grandmother Edna Rice Crane’s verse, Friends and Neighbahs (2017), is Past President of the Georgia Poetry Society and helps conduct a monthly poetry critique group.  He and his wife Janet live in Johns Creek, Georgia, a northern suburb of Atlanta.

Elizabeth Cranford Garcia is the current Poetry Editor for Dialogue: a Journal of Mormon Thought, previous Poetry Editor for Segullah, and a contributor to Fire in the Pasture: 21st Century Mormon Poets. Her work has appeared in a variety of journals and anthologies, and her first chapbook, Stunt Double, was published in 2015 through Finishing Line Press. Her three small children compete with her writing for attention, and usually win.

Michael Diebert is the author of the collection Life Outside the Set and of a second poetry manuscript in progress.  He serves as poetry editor for The Chattahoochee Review and teaches writing and literature at Perimeter College, Georgia State University.  In recent years he has led workshops for the Chattahoochee Valley Writers' Conference and the Blue Ridge Writers' Conference.  Recent poems have appeared in Free State Review and jmww.  A two-time cancer survivor, Michael lives in Avondale Estates, Georgia with his wife and dogs.