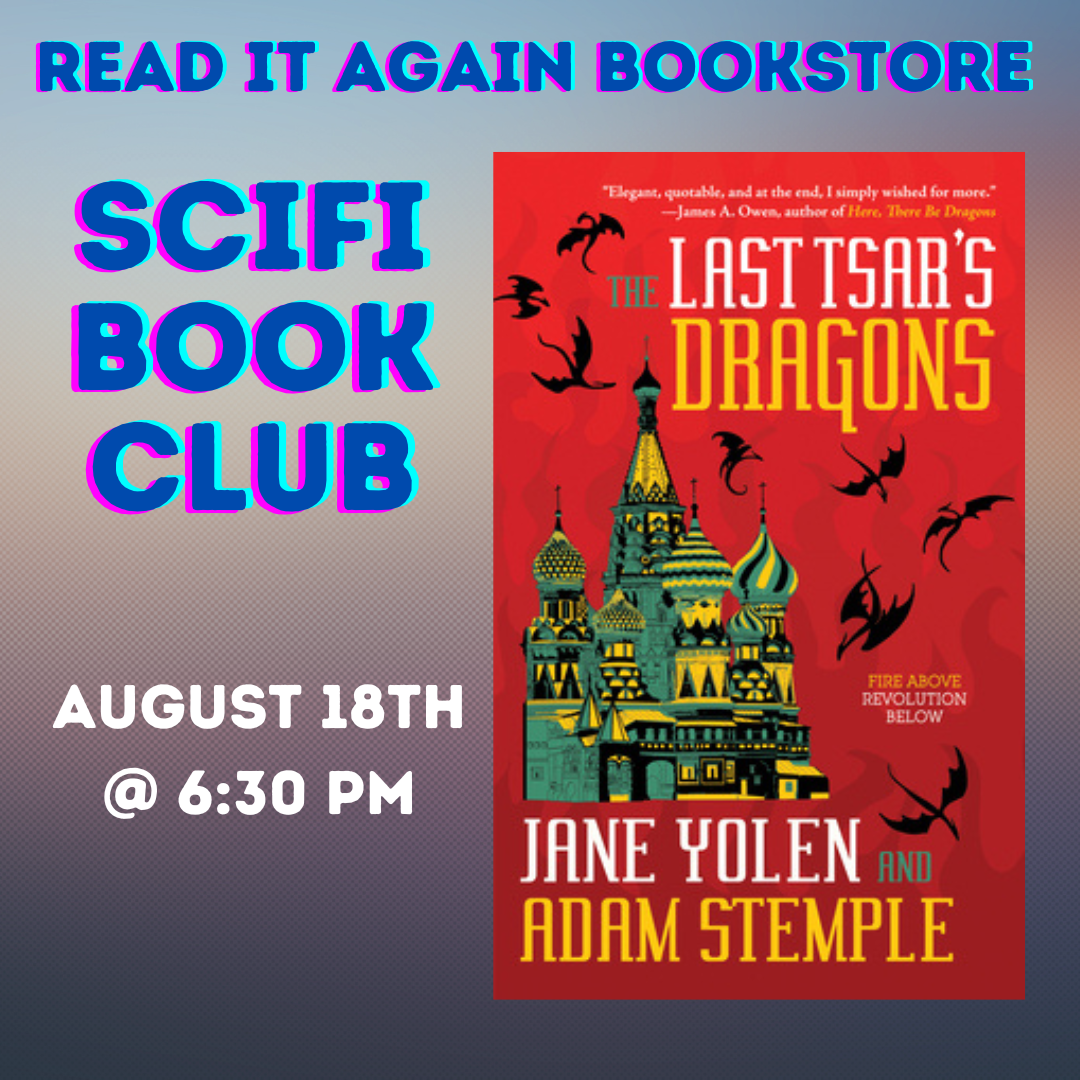 Join us on August 18th at 6:30 pm  for our SciFi Book Club's discussion of The Last Tsar's Dragons by Jane Yolen and Adam Stemple

"Vivid, gripping, and actually riveting as the Red Danger takes a whole new meaning here. Loved it." --The Book Smugglers

It is the waning days of the Russian monarchy. A reckless man rules the land and his dragons rule the sky. Though the Tsar aims his dragons at his enemies--Jews and Bolsheviks--his entire country is catching fire. Conspiracies suffuse the royal court: bureaucrats jostle one another for power, the mad monk Rasputin schemes for the Tsar's ear, and the desperate queen takes drastic measures to protect her family.

Revolution is in the air--and the Red Army is hatching its own weapons.

Discover Russia's October Revolution, reimagined in flight by the acclaimed mother-and-son writing team of the Locus Award-winning novel, Pay the Piper, and the Seelie Wars series.

Jane Yolen has been called the Hans Christian Andersen of America and the Aesop of the twentieth century. She is the author of over three hundred and sixty-five books, including children's fiction, poetry, short stories, graphic novels, nonfiction, fantasy, and science fiction. Her publications include Owl Moon, The Devil's Arithmetic, Briar Rose, Sister Emily's Starship, and Sister Light, Sister Dark. Among her many honors are the Caldecott and Christopher Medals, multiple Nebula, World Fantasy, Mythopoeic, Golden Kite, and Jewish Book awards; as well as the World Fantasy Association's Lifetime Achievement Award, and the Science Fiction Poetry Grand Master Award. Yolen is also a teacher of writing and a book reviewer. She lives in Western Massachusetts and St. Andrew, Scotland. Adam Stemple (www.adamstemple.com) is an author, musician, web designer, and professional card player. He has written eight novels, including Pay the Piper (with Jane Yolen), winner of the 2006 Locus Award winner for Best Young Adult Book. Of his debut solo novel, Singer of Souls, Anne McCaffrey said, One of the best first novels I have ever read.