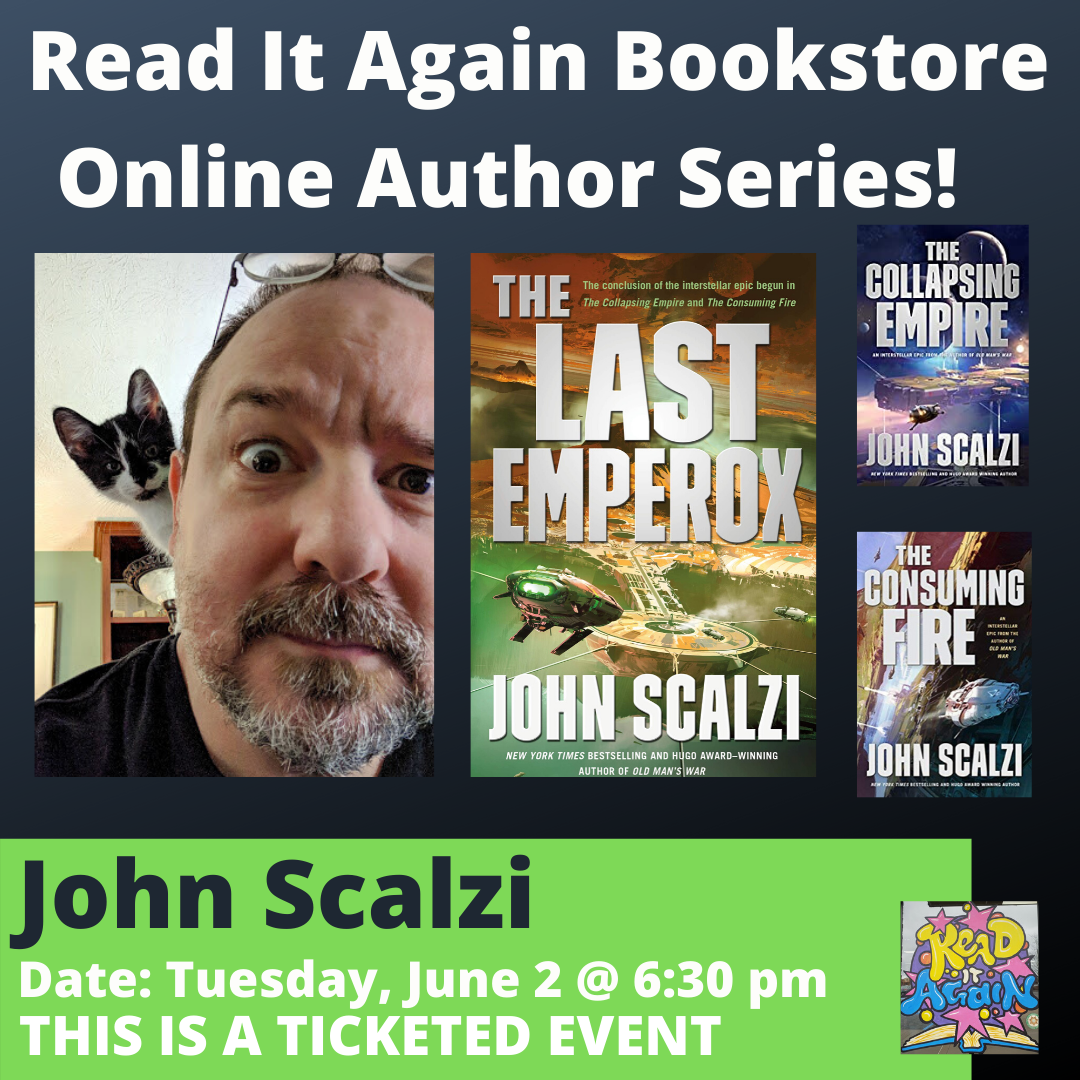 Read It Again Bookstore has partnered with fellow bookstore Fiction Addiction in Greenville, SC to offer this virtual event.

Tickets can be purchased through noon on Monday, 6/1/20.
Refunds can be requested up until the ticket cutoff.

The talk will be hosted at https://www.crowdcast.io/. You can watch through your browser and are not required to download any software (though mobile apps are also available). Once ticket sales cut off, you will be sent an email with the link to the specific event URL.

Shipping
Books and signed bookplates will be mailed approximately a week after the event.
*We will do our best to mail your books promptly, but this depends on how the COVID-19 crisis continues to unfold.

Refund Policy
You may request a full refund prior to ticket cutoff. After that, you will have already received the event link and so we cannot issue a refund.
If you miss the live event, you have up to 48 hours to watch the replay (at the same link) before it's taken down.

The collapse of The Flow, the interstellar pathway between the planets of the Interdependency, has accelerated. Entire star systems—and billions of people—are becoming cut off from the rest of human civilization. This collapse was foretold through scientific prediction… and yet, even as the evidence is obvious and insurmountable, many still try to rationalize, delay and profit from, these final days of one of the greatest empires humanity has ever known.

Emperox Grayland II has finally wrested control of her empire from those who oppose her and who deny the reality of this collapse. But “control” is a slippery thing, and even as Grayland strives to save as many of her people from impoverished isolation, the forces opposing her rule will make a final, desperate push to topple her from her throne and power, by any means necessary. Grayland and her thinning list of allies must use every tool at their disposal to save themselves, and all of humanity. And yet it may not be enough.

Will Grayland become the savior of her civilization… or the last emperox to wear the crown?

JOHN SCALZI is one of the most popular SF authors to emerge in the last decade. His debut Old Man's War won him the John W. Campbell Award for Best New Writer. His New York Times bestsellers include The Last Colony, Fuzzy Nation, and Redshirts (which won the 2013 Hugo Award for Best Novel). Material from his blog, Whatever (whatever.scalzi.com), has also earned him two other Hugo Awards. Scalzi also serves as critic-at-large for the Los Angeles Times. He lives in Ohio with his wife and daughter.

The Last Emperox (The Interdependency #3) (Hardcover)