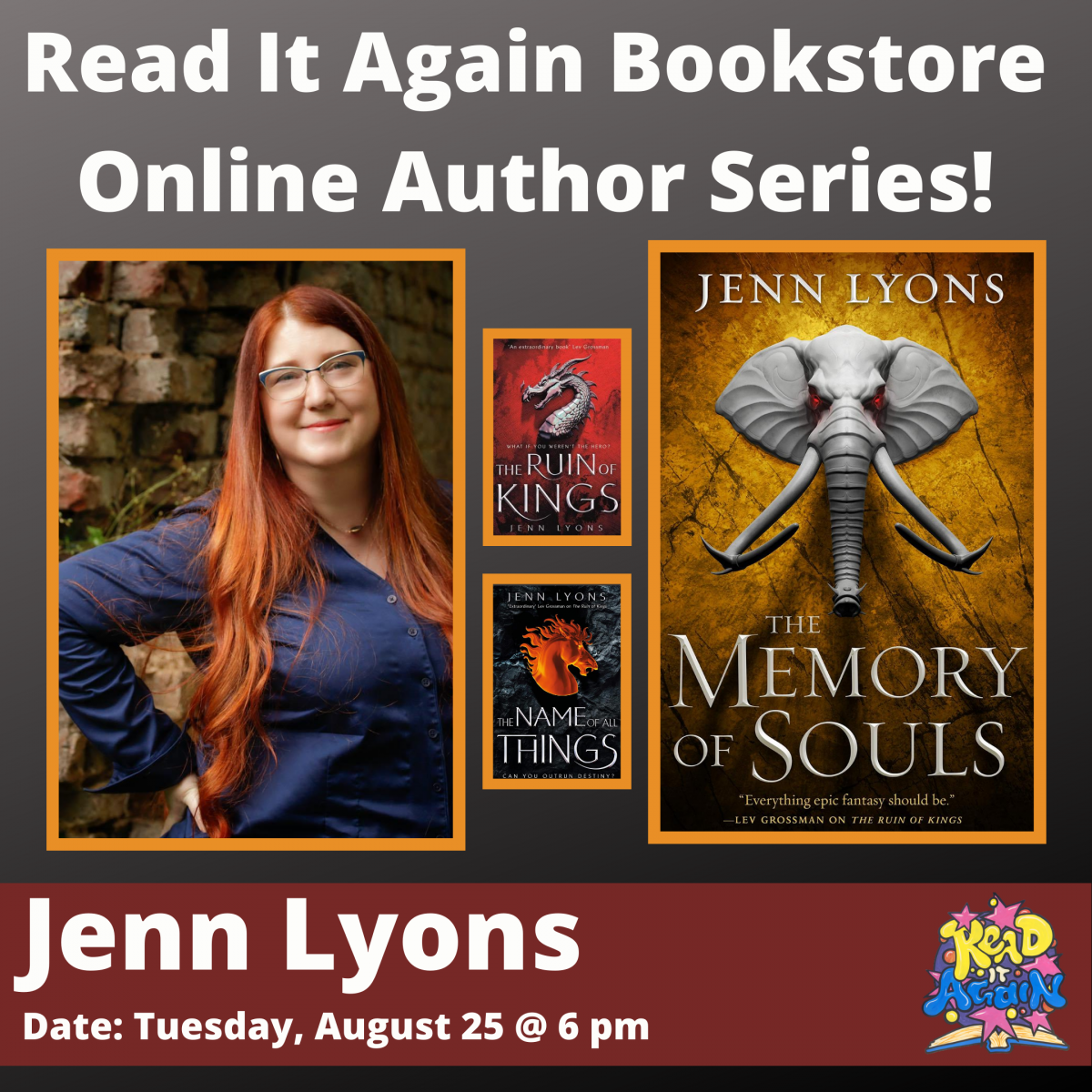 Read It Again Bookstore is very excited to welcome back one of their favorite authors- Jenn Lyons! Jenn is celebrating the release of her new book, Memory of Souls. Join us Tuesday, August 25th at 6pm.

You can watch this event here- https://www.youtube.com/watch?v=ssCpH12U5bo

Jenn Lyons was a graphic artist and illustrator for 20 years and has worked in video games for over a decade. She previously worked on The Saboteur and Lord of the Rings: Conquest at EA Games. She is based out of Atlanta, Georgia. Her Chorus of Dragons saga began with The Ruin of Kings, called "Sheer, effervescent joy" by The New York Times Book Review, followed by The Name of All Things, and continues in the newest volume, The Memory of Souls, coming out August from Tor Books. Follow her on Twitter: @jennlyonsauthor or visit www.jennlyons.com.

With her debut The Ruin of Kings (now available in trade paperback), Jenn Lyons burst onto the scene, bringing new game to the world of epic fantasy, receiving starred and glowing reviews from critics, readers, and booksellers alike.  Indeed, Lyons’ storytelling prowess gained her many fans, including Annapurna Television, who recently optioned The Ruin of Kings for development for a tv series.

Now, those looking to delve further into what NPR Books called, “One of the most immersive new fantasy series of 2019,” will be thrilled with THE MEMORY OF SOULS (Tor Hardcover; On-sale: August 25, 2020), the newest in the A Chorus of Dragons saga. With this latest gripping adventure, Jenn Lyons returns to the meticulously detailed world she has created and continues to deliver an expansive, thrilling journey in captivating fashion.

In THE MEMORY OF SOULS, Lyons brings us back to Kihrin's story and the stakes are higher than ever, with more dragons, a mission from the gods themselves, and the fate of the entire empire resting in the balance.

What would you give to save all you've ever known?

Now that Relos Var’s plan to free the dark god Vol Karoth has been revealed and with more demons rampaging across Quur every day—the end of the world is closer than ever.

To buy time for humanity, Kihrin, Janel, and Thurvishar must convince the king of the Manol vané to perform an ancient ritual that will strip the vané of their immortality—a ritual that certain vané will do anything to prevent. Including assassinating the ones bringing the news.

Worse, Kihin must come to terms with the horrifying possibility that his connection to Vol Karoth is steadily growing in strength. How can Kihrin hope to save anyone when he might turn out to be the greatest threat of them all?

The Memory of Souls (A Chorus of Dragons #3) (Hardcover)